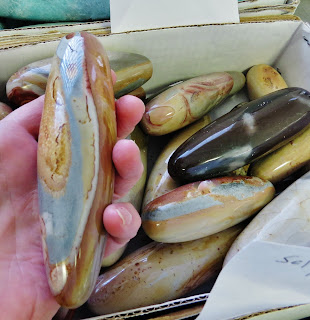 The annual rock hound show held in the park is an event not to be missed! This year an old guy(probably my age) from Idaho hauled in tons, I mean TONS of rock from Madagascar , all of it gorgeous. 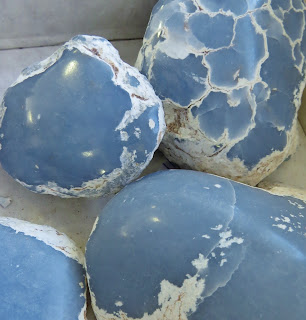 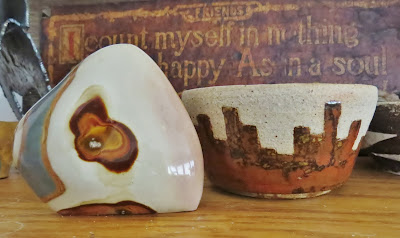 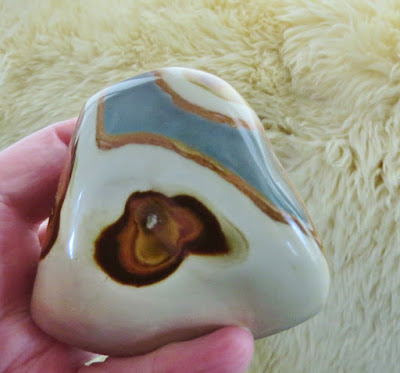 and this, from Morocco, looks like a tired clam, but when it is opened.... 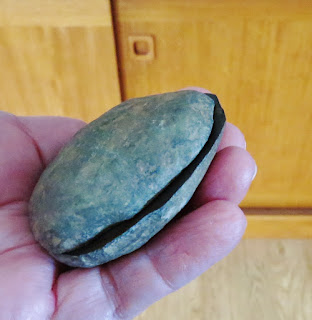 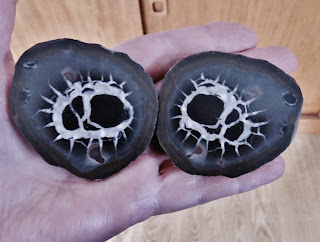 My Dad was a rock hound, knew Wyoming like breathing or heart beating or the back of his hand...he knew, in that vast nothingness that there was treasure, and damned if he did not find it! He had a saw in the basement and some lapidary tools- cutting stone and grinding his fingernails down to nubbins gave him peace of mind. I sometimes went out with him to the dirt - just looked like dirt to me, but he could zero in on a very slight bump on the Mars like surface of the high prairie- from yards away, bring it home, work with it and VOILA! a precious stone!

Back then I was too teenagery to appreciate the trips out to the big dirt, but it stuck somehow, in my soul. I am going to go back to Wyoming for a few days in a couple of months, hoping to find an old guy (my age) who knows Wyoming like breathing and heart beating to look for rocks...
Just noticed that my hand is blue/grey in this photo...I better hurry, looks like I am dying, or already there.


And today is the Birthday of Two sons, Erik born on Wayne's 21st birthday- We were living out on the Reservation in a cabin, I had made salmon with orange sauce, and the richest mousse, double chocolate Baileys and cream! Celebrating Wayne's 21st Birthday! THEN, whoosh- water broke and I had no idea that it would continue to flow all the way into town which was miles and miles  and towels away...BAM, into the hospital baby center, POP- there he is, so quick that I did not get to use the being- with -child -classes- breathing skills
Stayed briefly as we do in this fugged up country, back to the cabin with this tiny gem of a person, Mr. Man off to the Grand Cayman's to go diving-  then for a hike down the Grand Canyon- and that was that.
A bit of a challenge out on the Rez.

We moved into town when Erik was 18 months old, into a house that had more room, Wise decision.
The cabin was minuscule  and would not have held us for very much longer. The distance from town was too far...By the time I got to town with all of the baby gear the list for groceries, the doctor''s appointment or whatever, I would have to just turn around an go back because Baby was either poopy, too tired, crying, hungry, wet, throwy uppy, or just plain miserable riding that far.
Baby won , every time.
Happy Birthday. 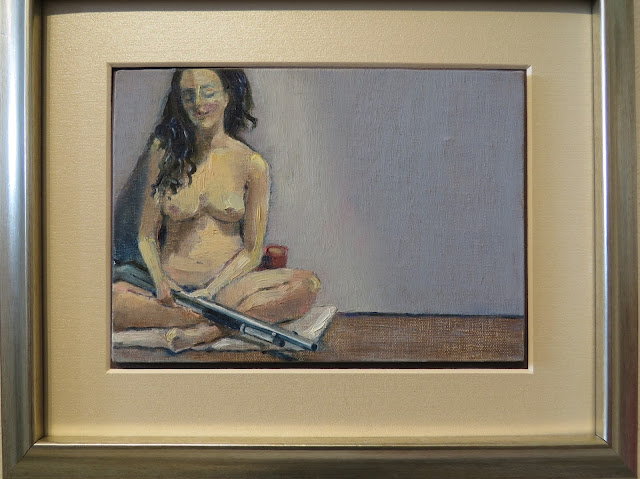 The ship of fools show is held every April first, It used to be a major event when it was held at our friend's gallery downtown, but , as all good things end...it ended when they sold the gallery to people who changed it into a weird tango lounge. The gallery in Fairhaven also changed hands and has become a sort of art school, but the owner has humored us all by having the ship of fools there for the past three years, This one is  the last...the gallery is being torn down to make way for more bloody apartments! Damn.
Anyway, here is a small representation of some of the art this year. 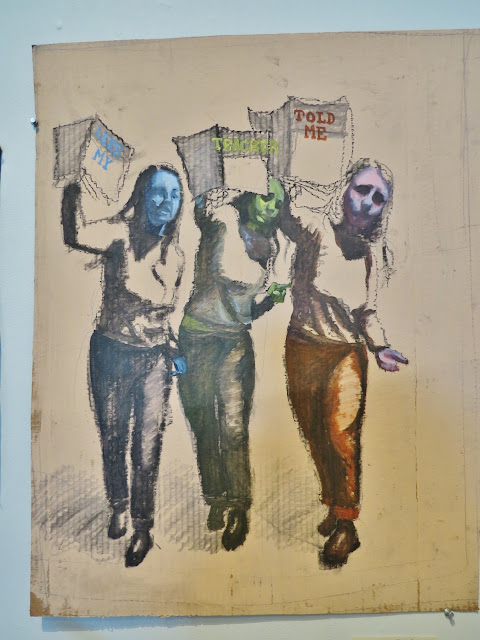 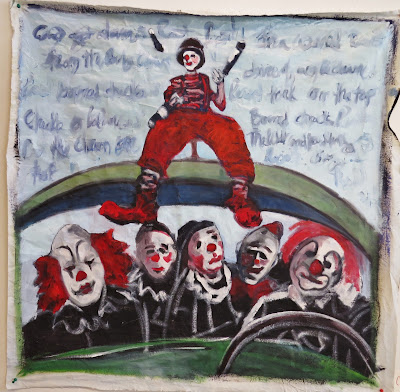 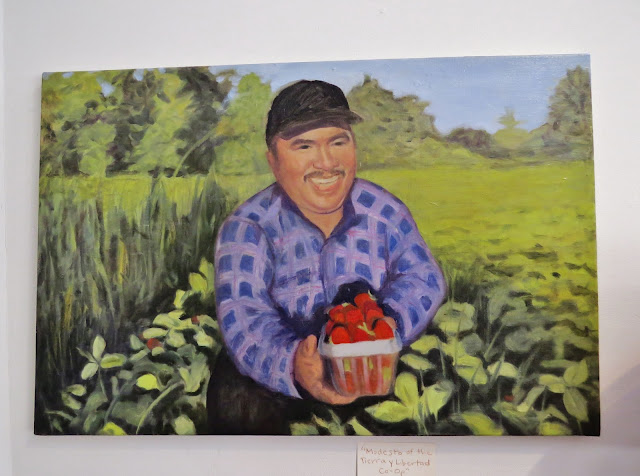 Our travel pal, Wade made this "signed by the devil himself" bible, flashing led lights inside the book, burning hell fire! 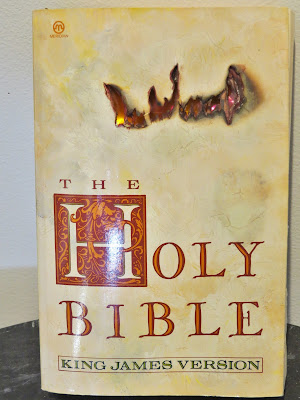 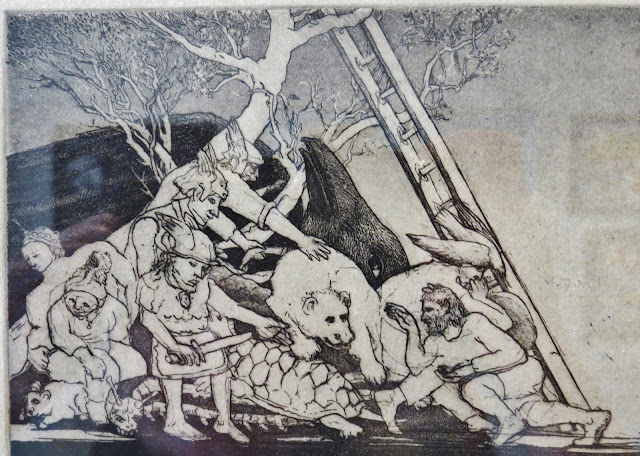 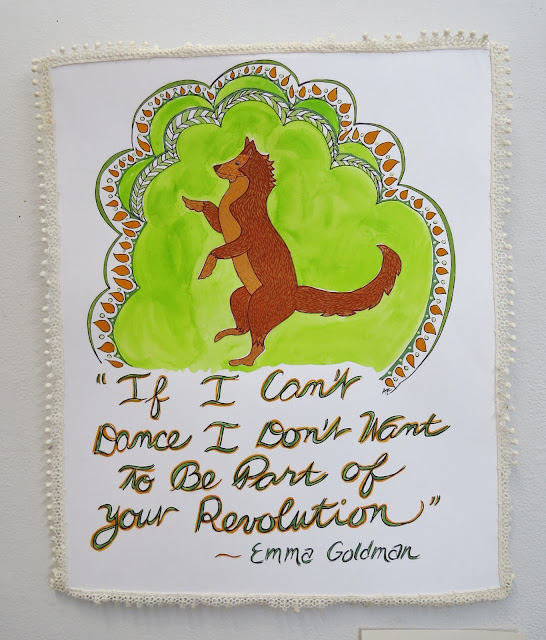 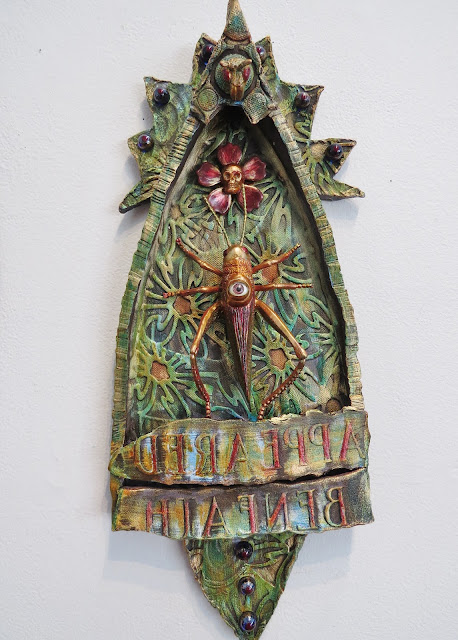 Time To Go,
All in all a great show, sad to see it go. 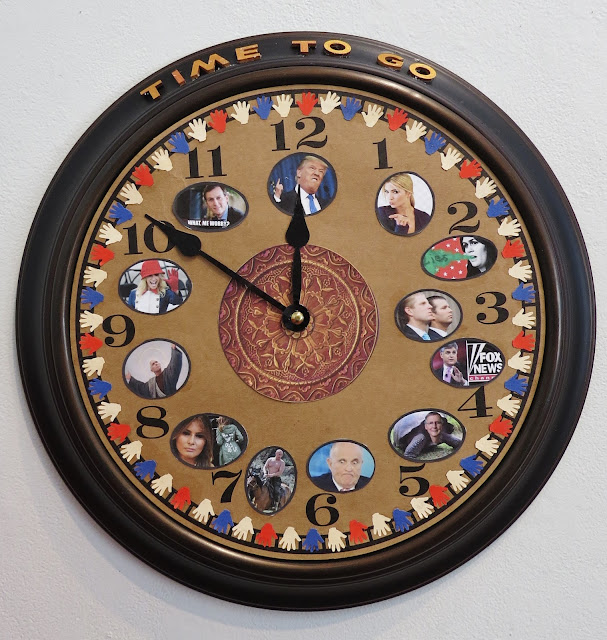 Came home and watched "Human Odyssey" on PBS, which puts everything into a manageable perspective. If you get a chance to see it do so, it may be in libraries by now.
Curious to know  from where we have come- and watching where we are going, The first species able to watch our demise, our extinction, right before our very eyes.
Curious also about white folks , mutations adapting to the north, breeding and fighting with -finally replacing the Neanderthal, though we still carry their DNA.
The Neanderthal were not dumb  as folks have thought, they were highly successful for over 70,000 years!The difference between them and the homo sapiens, was ART, Music, Ritual, puzzle solving in an out of the box way.  Sapien meaning "Wise". Guess we lost that definition. And, unfortunately for the planet , are way too successful at reproducing.
As the planet changes, those who may survive will be  dark skinned, mutant white folks  will be the first to go.
bu-bye!
So , all of that perspective is great for dealing with this era, We are just along for the ride.
at April 04, 2019 13 comments:

Mid week with Stella of the best ideas 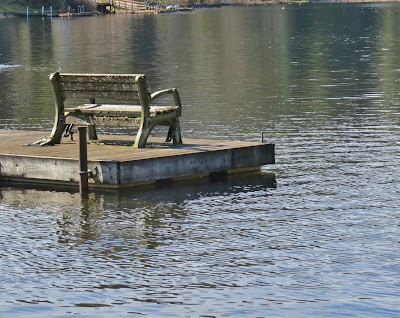 Stella's little gem of a house on the lake, Springtime is closest thing to heaven I can imagine.
Winter shut down like a concrete curtain fell, boom, over...

We got tickets to go see Steve N Seagulls in Seattle.
We went two years ago and though they played for only about an hour we have become fans and would follow them everywhere, IF we were not old, and IF we had cash to burn...
Anyway, they are Finnish from Finland! They are talented and completely mad! 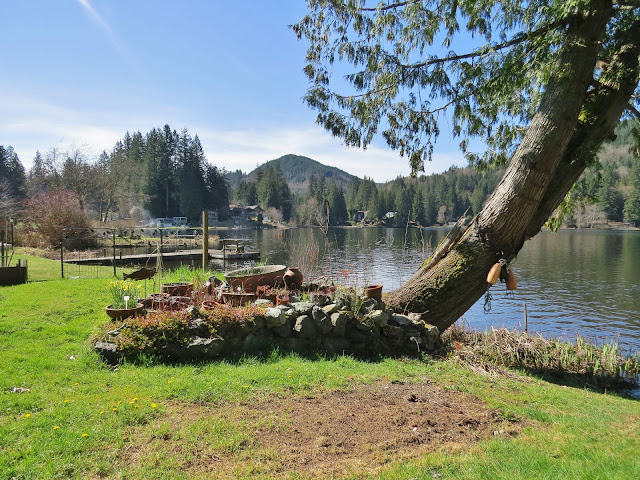 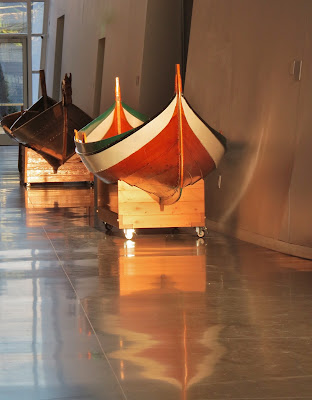 We stayed in a weird but clean and comfortable hotel north of Seattle close to the freeway so we could just scoot out quickly before traffic.

We got a LIFT to the Nordic museum where we spent an hour and a half cruising through our heritage- we are indeed blockheads of Nordic DNA, which just gets all sentimental and riled up  in a place such as this.

We walked to the Tractor tavern from the museum, down through Ballard, the Scandinavian part of town, Shops all shut but the window displays were worthy, reindeer skins on modern light wood chairs...sleek lamps, that sort of minimalist design, Scandinavian and Japanese have that in common. 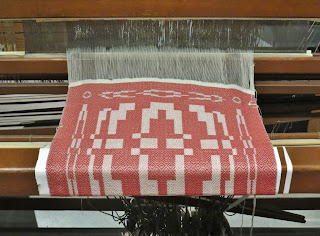 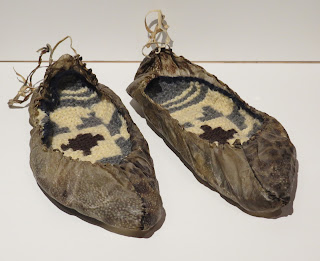 The fish skin shoes have a lovely insert of hand  spun, woven wool. This example is very old, hundreds of years, and holding up ! Who would have guessed to use fish for shoes. well, the Finnish , of course, of all the Scandinavian countries the Finnish are most inventive and a bit off their rockers. The most interesting/ artistic .as well. Utterly mad, honest, straight forward , no time for bullshit, thank you- just get on with your business, which is yours alone...most acceptable. Just shut up and allow at least ten feet of personal space at all times. 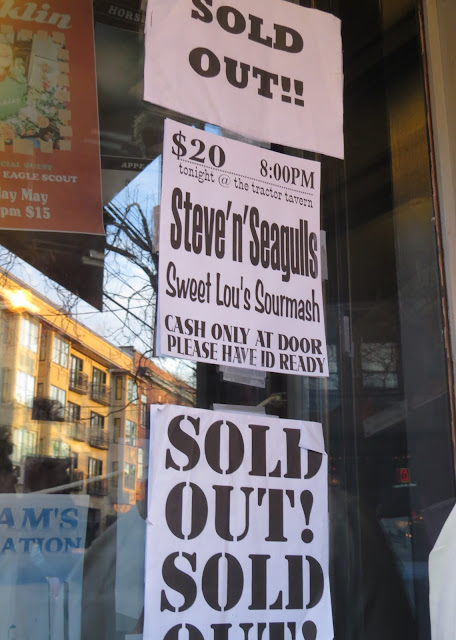 A fabulous time was had, we were in bed by 1:00 a.m. - up at the crack of dawn for breakfast  which was included- ham ,eggs, waffles, fruit, terrible coffee, enough to fuel us for the ride home, where we passed a cabin on the road, as you do...

This is the Pacific Northwest. 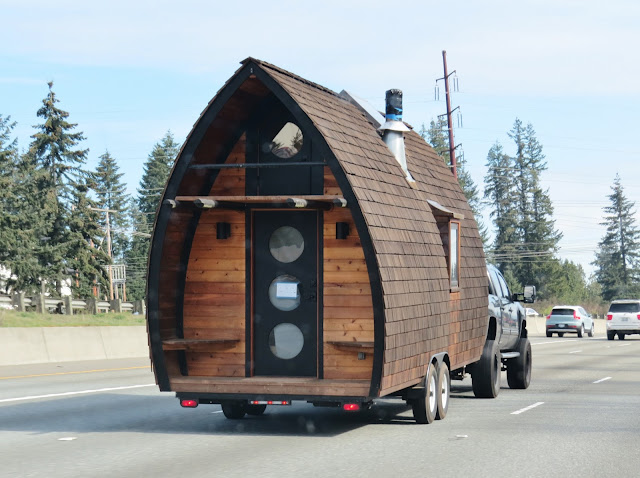 Went to a few charity shops and thrift stores along the way, bought goofy  stuff but not much...nothing over three bucks.
Went to a really good Mexican cafe, the fajita burrito was enormous, full of fresh beautifully cooked vegetables, a bean or two and the freshest guacamole ever. Delish! Great salsa, also so fresh it was like eating a garden. 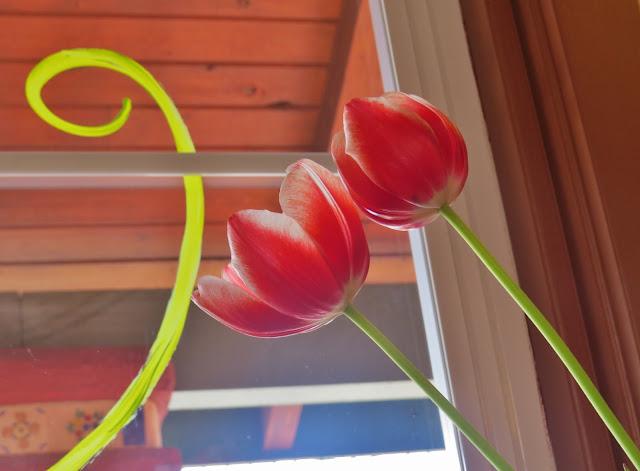 Then back to Stella's to pick up my car, and to admire her eagle. 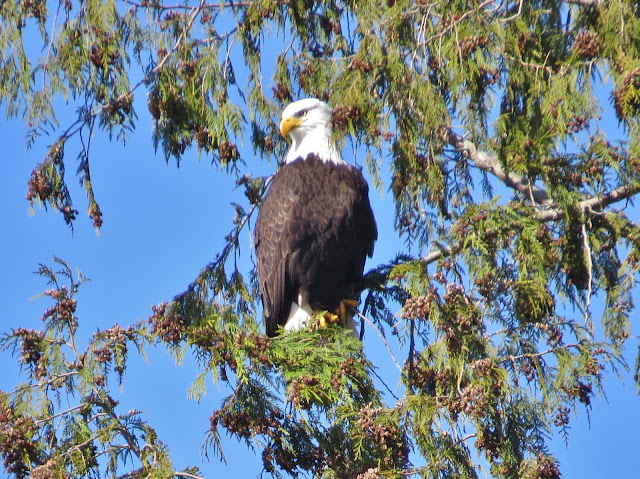 Finally back at home, feeding Pants nuts, and worm medicine,
He seems to be doing better each day,
Fingers crossed for this funny little guy.
He has been such a good sport. Last summer he liked to run through the front door, through the house to the deck door, He would stop for a moment to check out my digs, making sure that I was not hoarding nuts, I suppose, startling any friends that happened to be here for cups of tea - to commiserate about neck jail...and/or the Orange Thing.
Difficult to take life too seriously with Pants darting about.

I owe him! He did humor me when I was  in jail. 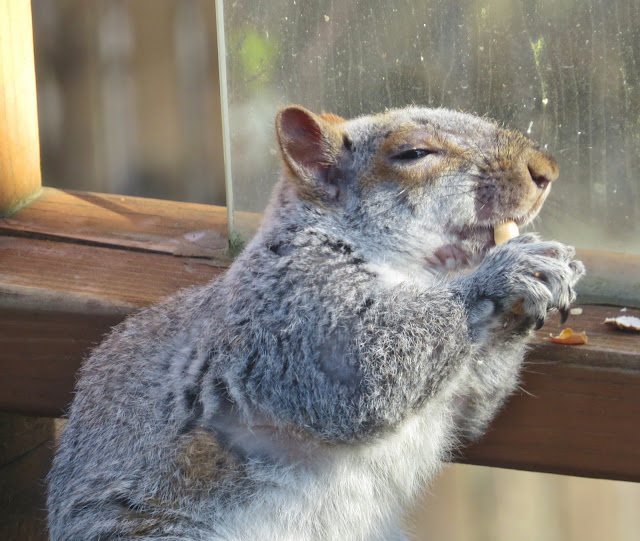 Also, glad now that I did not buy a 650.00 dollar ticket to the Stones ( as if)- At least it was not Keith, thank the rock and roll gods for that!
Ironic isn't it, Mick the most athletic conservative of the lot gets nailed with heart issues at the tender age of (?) not that much older than me..anyway, that was NOT great news, but all indications point to favorable out come. The eight ball has predicted.
at April 02, 2019 14 comments: