leaving on a jet plane 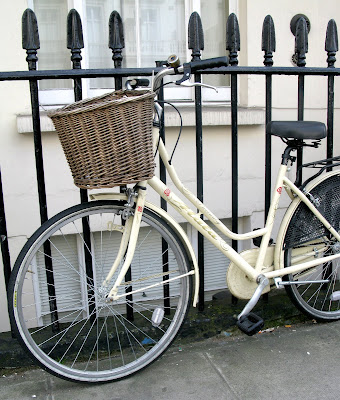 loose ends tied up , I think, could have missed something but it will not matter once in the air.
Off on an adventure! 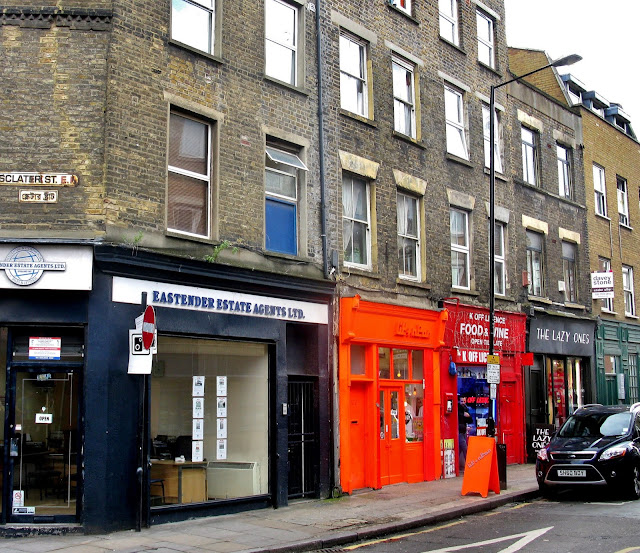 All of the times I have been to my favorite city I have never gone to the towers, this time I will. 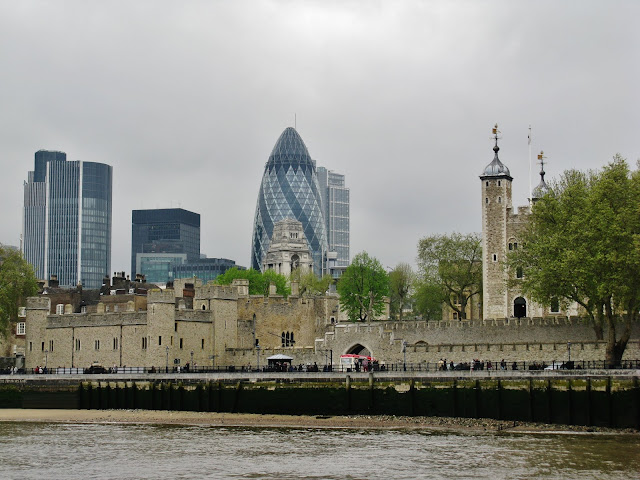 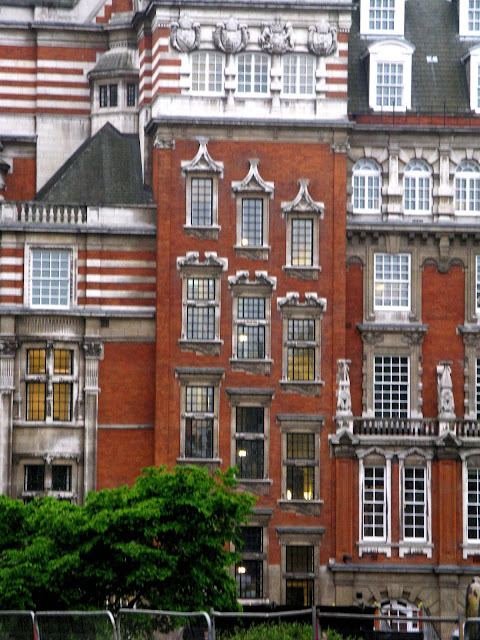 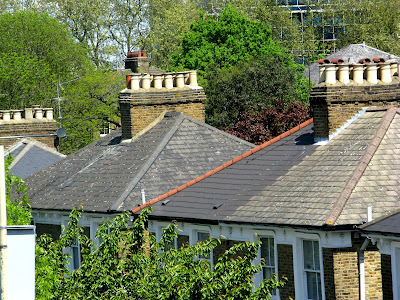 Tomorrow morning, fingers crossed, and hopes that the flat I have rented is not a dump. Might stop in Bricklane and pick up some fashion fabric to cover my butt.
see you in February.
happy trails. 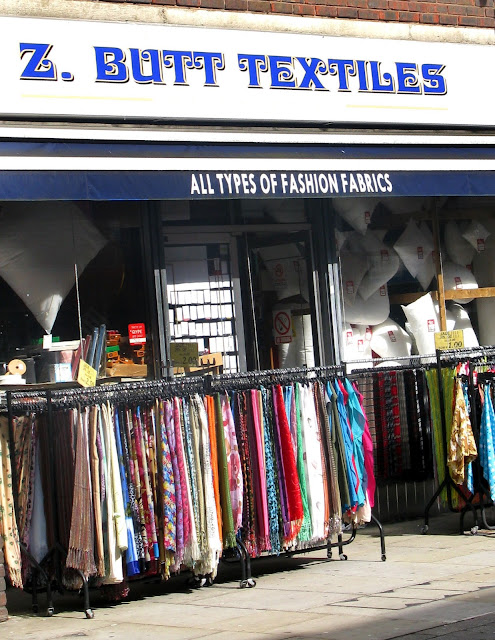 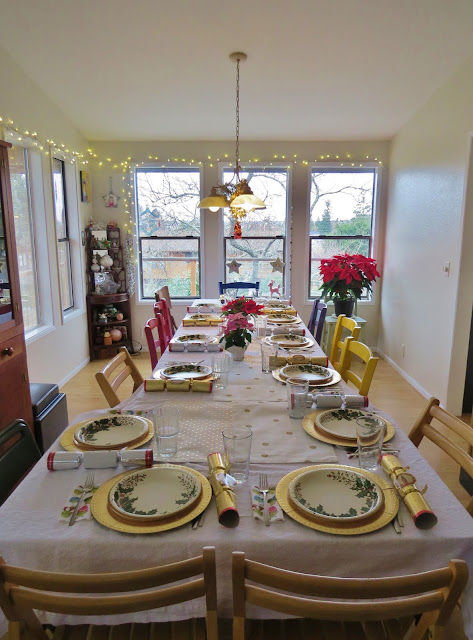 I went to the butcher shop and bought the most expensive standing rib roast on the planet, prepared it well with herbs and garlic and Hawaiian red salt overnight. Did the math for a nineteen pound side of cow  (for godsake!) preheated oven to a zillion degrees for the first thirty minutes , then , they say , turn down to 350 and let cook for six hours...our oven is off- it is hotter than the temp gage says - the roast was well done in half the time, not a smidgen of pink . Folks not arriving for yet another four hours. Damn!
No one complained , it was good anyway, and now I know for sure how OFF our oven is . I had always just assumed it was my poor baking skills in question. 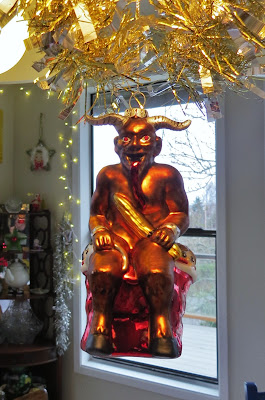 Merry Krampus hangs in the center of the table, because all of us have likely been bad children...

The queen of Christmas reigns, flashing her engagement ring around in case you have forgotten. I love the non wedding they have planned/not planned, they are running away , to Ireland to get married. No body in attendance- on the side of a bluff overlooking the Irish sea. 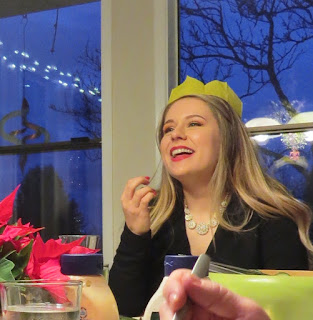 mish mash table setting and chairs from anywhere- no body seemed to mind that either, or that we  entertain in a tunnel...all the grand babies  are adults , going about their business in life.
Sons, Daughters , ex-wife and Stella who is now part of the clan whether she accepts or not. 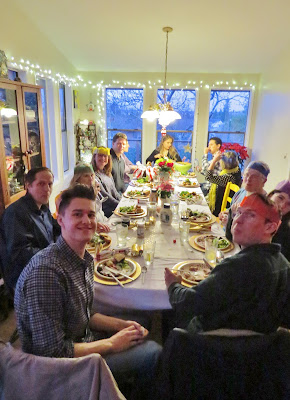 Finally opened the raspberry infused Vodka given to me several birthdays ago , from Erik.

It is pretty and festive but...do you remember Romilar cough syrup? A bit like that... 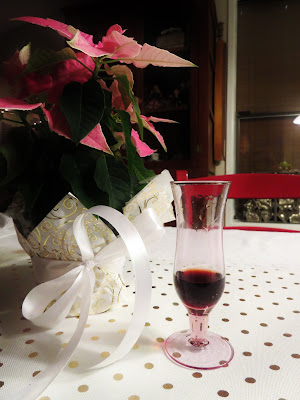 On Christmas day we went to Janet's for the best meal of the holiday, That gal can cook!
Kids home from their various lives, doing well, med school, Teaching, chemistry research- and one  home from her stay at Children's Hospital in Seattle, waiting for a heart.
It must come soon, emergency situation, though this child has had only half a heart all her life, Patched and surgeried  often,  now it is critical that a new heart be found.
O type blood so not an easy off the rack heart to find.

She sang "I'll be home for Christmas, if only in my dreams" the gals got pipes! Lovely. 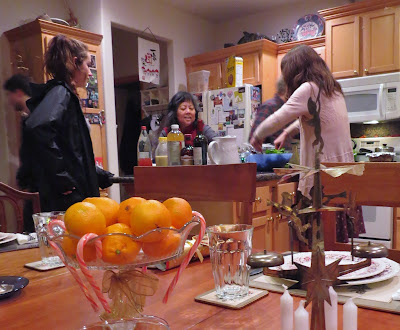 First Christmas as old married folks- these two, who had to leave their baby behind - a border collie puppy who eats chairs and herds anything that moves- too much of a trip for a youngin'. 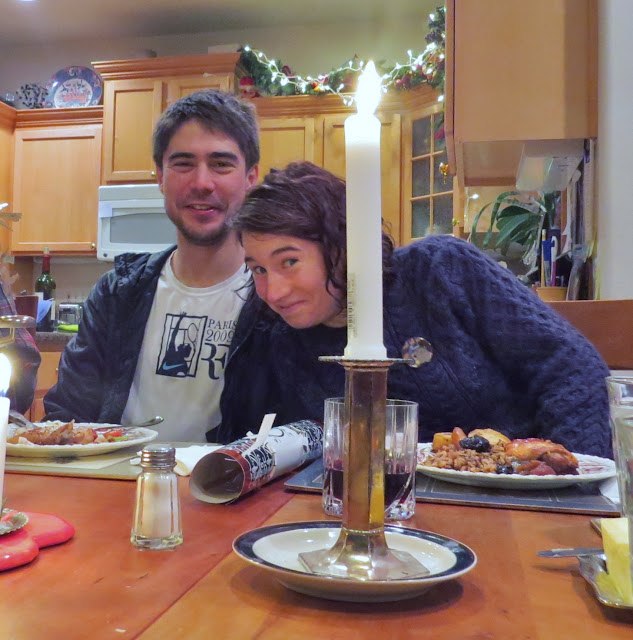 My car died in the driveway, I had trouble starting it , for about a month,  Mr. Man pretty much thought I wasn't doing it right.  "First turn the key , then punch the gas!" Last laugh on both of us- The entire starter needs replacing, I will not have it until after many dollars have been spent and I am in the air over the big water.
I don't even know how to pack this time. Tiny carry on. Weather a mystery.
Apprehensive....BUT I did get another coat so am not taking my monster that frightens little children and could take up two airline seats on it's own. 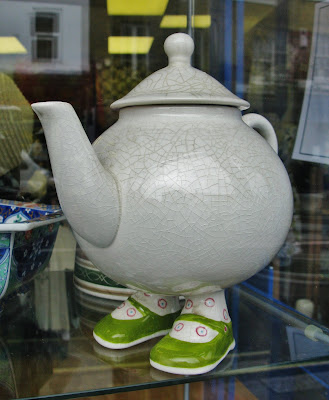 When I was a young rascal, living in London, I had zero money, we got by on our wits. I walked all day to avoid the cold house , heated with the coal that we could scrounge- sounds Victorian Dickens-ish, but it was out of choice, I loved the life and knew that I could go back to America at any time. I was having an adventure- an experience, and it was good.

Of course I could not buy anything, I sent some things home as Christmas presents that I had found on the street- a button, a napkin, a chain with glass bells on it...but I did yearn for one thing, and that was a Carlton walking ware tea pot.

In the seventies The company changed to making novelty ware so they could keep the company afloat, thus the walking ware tea sets.
Even back then they were expensive. I have searched for one ever since, hoping to find one in a charity shop in London- found one (above)...but it was thirty nine pounds- and crazed, with a chip on the lid. I let it go...

Every time I go back to London I look for one, every time I fail. Looked online but they are now $90.00 plus shipping.

As I was getting the roast for Christmas dinner, I popped into the Assistance League charity shop  to get an ornament for a package. In the back, behind all of the other tea pots stood my favorite girl- with blue Mary Jane's- not a scratch, not a chip, in perfect unused condition. 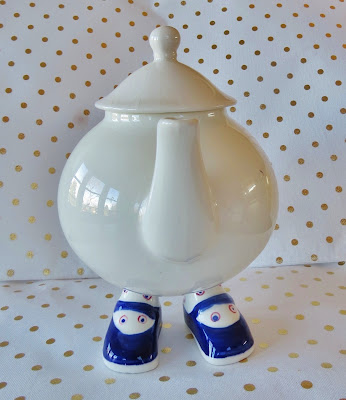 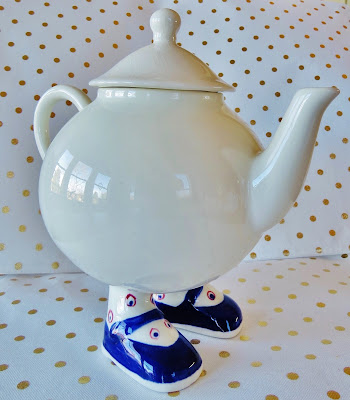 I came home feeling as happy as if I had just gotten a new puppy, went through some stuff to either toss or stuff back from whence it came- This "gift" for my Mom, painted on the floor of my childhood bedroom on huge paper that I had found behind the furnace would do - mom happened to like a certain perfume, Este Lauder something,  I could not buy her any - there was,however,  an advertisement in one of her magazines for that favorite perfume,  I copied it with  a pencil and my sad tin of water colors, nearly as good as getting the real deal, right?  She was so gracious, as usual.bless her, Thanked me profusely -" Merriest Christmas present ", that sort of thing. Only now do I realize how very sweet she was about it- and I do laugh  at what I thought was an appropriate gift...I remember my brother had robbed my piggy bank to play Monopoly with his friends- he lost and never repaid me, so I had to think outside the box, oh yes, job well done...thought I was so clever.

I also made a flat  hand stitched rabbit for her and a cow head out of an old purse, but those things did not survive , Why this did I will never know.but it is worth the warm and loving memory of  when "t'is a gift to be simple" was a thing, and simple I was! 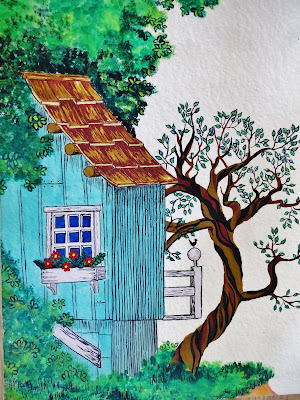 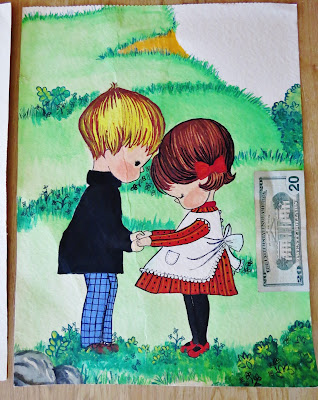 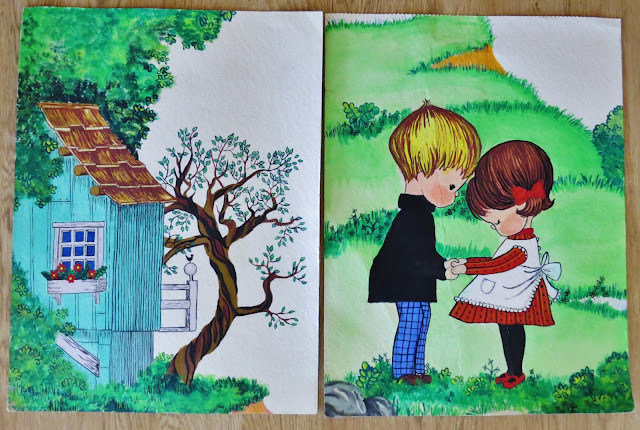 Gift giving - so subjective isn't it.
And really, the perfume would have been long gone by now or very stale- but this THIS bit of magnificence may last longer than I do if I keep it behind  the china hutch from whence it came ...
leave it for some one else to find , in another life and have a WTF moment.
Anyway, Merry and Bright to you all.
Cheers!
I hope that you get the tea pot of your dreams!