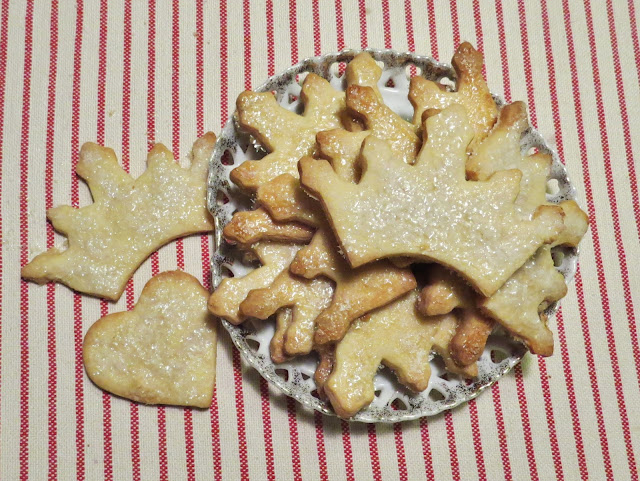 It is 2:00 in the morning. After fifteen hours with no power the lights returned, the heater came on- Swedish twist I had made  but not yet  baked-   yeast  probably died...finally got baked anyway, just now.
Also  shortbread crowns , using the left over dough that was not enough for a crown  to make a heart shape.

We do pretty well when the power goes out even though this house depends nearly entirely on electricity, We have camped, we know what to do, and Mr. Man has gadgets and flash lights made by magicians , I am sure of it-   effective, better than desert day light!
I think I will use his magnificent flash light the next time I want to clean  house, EVERYTHING shows up- even the stuff that is not there, that is how effective the light is!

These are the twists - unattractive, but it's not about appearance ,  is it, it's about butter . fresh ground Cinnamon and maple sugar, and the ten pounds you ,guaranteed ,will  put on having eaten just one!
I know , I have eaten two...
BOOMPH! 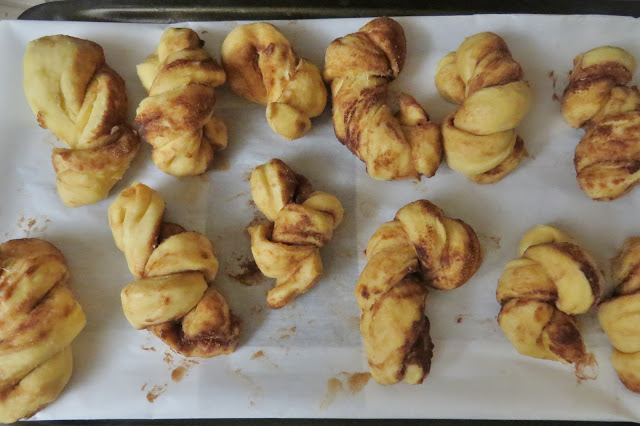 I am hosting Dinner again , for family Christmas, Only fourteen so far, Erik can not come because he is minding the dog, in Portland. I will see him soon enough even though not at this magical time of Chrimbug- He is meeting me in London in January.


It is my birthday.


I am officially elderly though I did not realize how elderly until my body broke itself.

BAM, that slapped me silly.

And so , for my birthday, Mr. Man went to cost co and bought this magnificent stand up. sit down, desk for my PC. 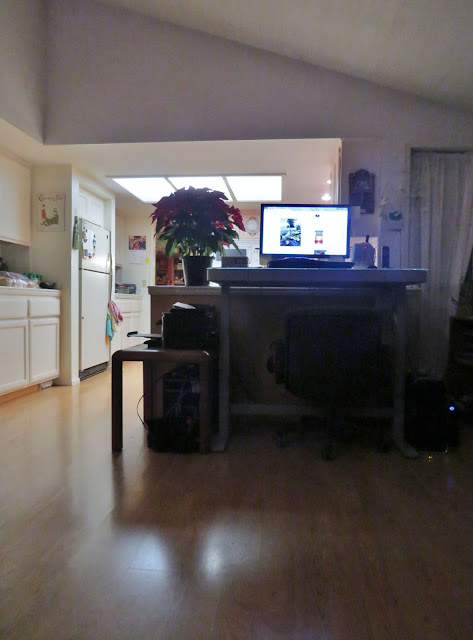 (it is still 2:00 am, thus the grainy  photos)
There is a  button that upper or lowers  the desk and is just the ticket for work- especially since "sitting for hours" is equivalent to the effects of smoking one million cigarettes- they say...
I prefer to stand up  to do things, Bake at 2:00A.M. , compute, do art- this desk really bails me out. Thanks Mr. Man, and Cost co- you saved a life! 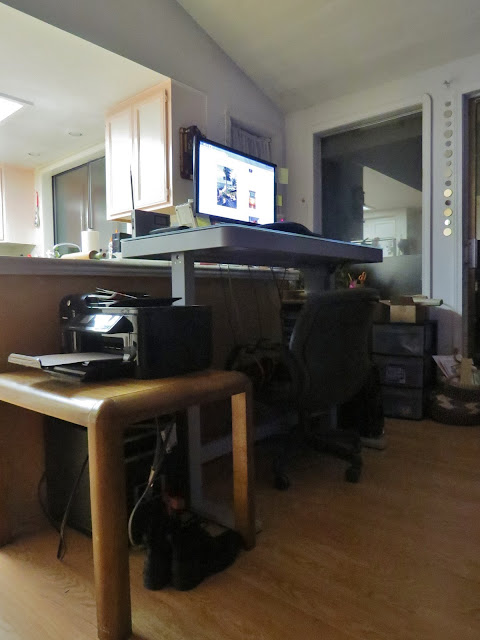 Day of Krampus ,for me ,a new IPHONE, I love it , it does stuff! Unlike my tiny old phone this one has a  BIG  screen  -I can actually decipher . Annoying to lose vision!
I will be able to take just one device with me instead of three, this phone does it all!
*****

It has been a "deep" week, We went to our neighbor's house for an afternoon of listening to his book that his daughter, who travels from The Hague , helps him write-
mostly centered on his life during Indonesian occupation and independence. a little known war, in that era of Nazi horror and Unit  731, so incredibly monstrous!
His family had moved from Holland to Indonesia when he was very young, he was interred, imprisoned, as a young boy, allowed to leave the "camp" only to do hefty manual labor- hungry, cold, frightened,  terrorized,  he made it through- without feelings of hate, vengeance or regret, but rather with  generous understanding  and forgiveness.

His entire family, fans of the bible and Christianity, seemed to have made it work well for them.

Anyway, Remarkable life story, remarkable time in history, I mentioned it to Erik- He said that all his generation could offer the "youngin's"  are tales of Burning Man.

Then , mid week, A young  woman stood on the RR tacks, with determination , resolve,  a broken will and broken  heart, as the train ,  ended  her life .  I have known her, not closely, for years. Seems she has always been around , opened shops, dealt antiques, worked for charity, a musician- a sprite, a light up the darkness sort of girl, a beauty, tall, willowy, long bond hair, bright blue eyes, yes, a true head turning beauty-  fine line, mania/despair, skittering across the surface like a drop of water on a hot skillet.

no help for the mentally  unwell.... not in this country - Standing in the middle of the tracks might seem rational.

As I said, - Deep week.
Do whatever gets you through, be it faith,  common sense, math, science, art or fancy, I advise  myself...
Be  inspired, if  able, bake at 2:00 am, use  wacky  imagination to every one's benefit,  imagine a good, kind world full of  beneficial faeries or helpful  angels, or animals that  talk to you in wise baritone voices... whatever makes this life seem less serious, this grand illusion is worth the ride.

Here's a battered angel to guide you.
She looks like she is guiding you to squat and contemplate.

*****
Speaking of- Erik sent a TUSHY for our Christmas "the old folks" present, we installed it last night, It is a bum squirter to save on TP-  thoughtful on two levels , environmentally friendly and bum soothing comfort.
Good lad. 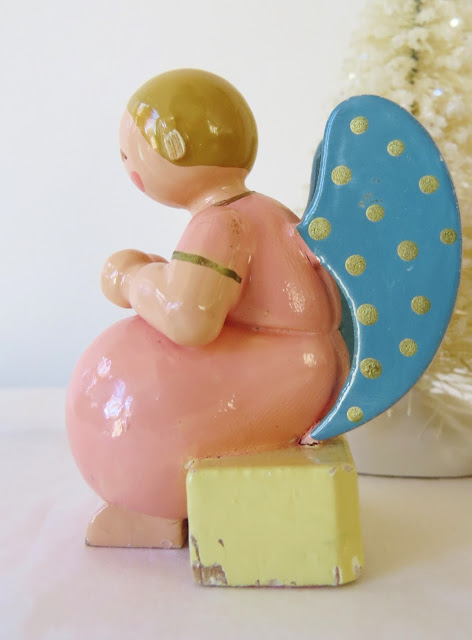 - Peace in your heart , have a lovely Christmas, whatever that means to you. Stay well, See you around the corner. To me  and to all who have holiday birthdays, the lights and glittery fuss is actually for you!
at December 21, 2018 8 comments: