Rutting season, clank and boomph in the yard 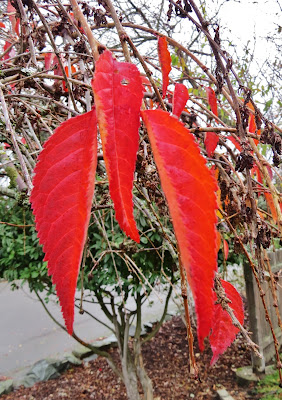 Yesterday morning I took my coffee out on the deck , took a photo of the last clinging cherry leaves. listening to a BOOMPH sound around the back, At first I thought it was the usual Gull on the roof or a flicker pounding out LOVE messages to any other flicker who might be in the mood.


There were two older buck in the back, one as you can see with a terribly broken leg , the other quite full of sass and vigor, with mating on his mind. Rubbing his antlers against the deck posts, aggressively.


The crippled buck just went on about his business.
The other made his way to the front yard. He just stood and watched, as a younger male tore up the Rhody bush. Decided the younger buck was not worth a fight, I guess, ambled up the drive and into the thicket of the neighbor's yard, 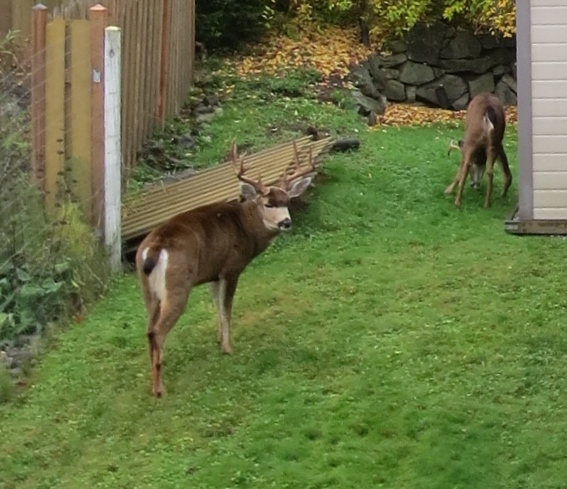 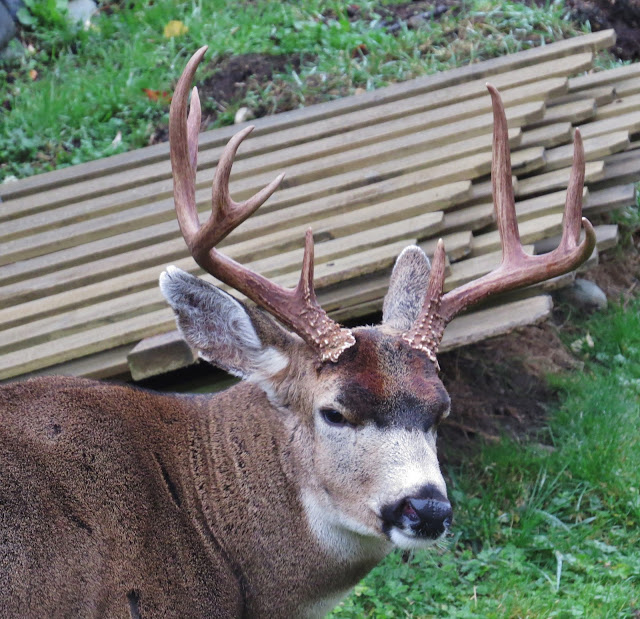 Branches flying , enthusiastic antler rubbing.
Already establishing his territory, and his yearling, potential harem. The young buck did his best to impress. The Rhody did not stand a chance. 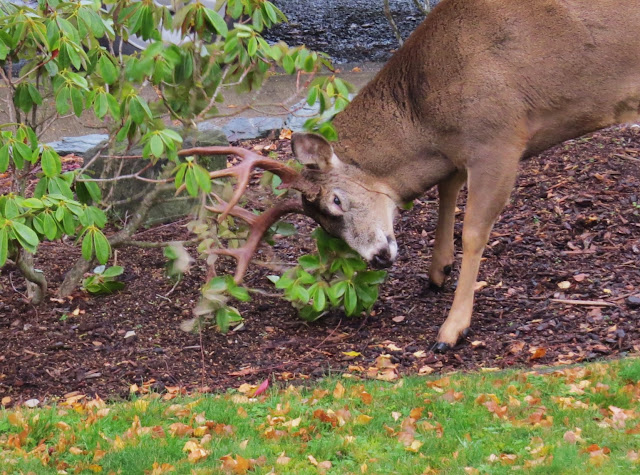 Yearling  Does  freaked , run away, through the back yard and over the fence.
The little guy also sees what is coming and quietly backs up into the neighbors yard- disappears behind the thick undergrowth, where Mr. Magnificent had gone.
There is a challenger, though! 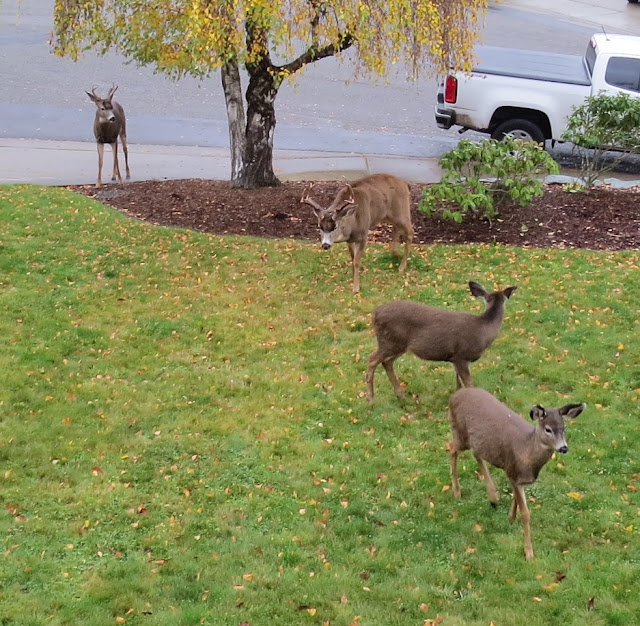 Walking head down in a menacing manner, he comes from the side of the house ,approaches slowly and CLACK!
They engage!
Clack clack clack clack. 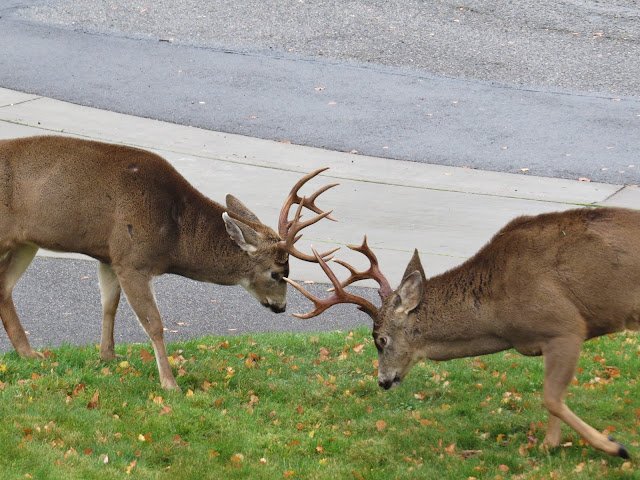 It is a vigorous fight, I am thinking of their headaches and  possible broken necks, but that does not happen with  rutting. The most damage to the bucks is weight loss, not a good thing  just before winter sets in.  Nature is weird. 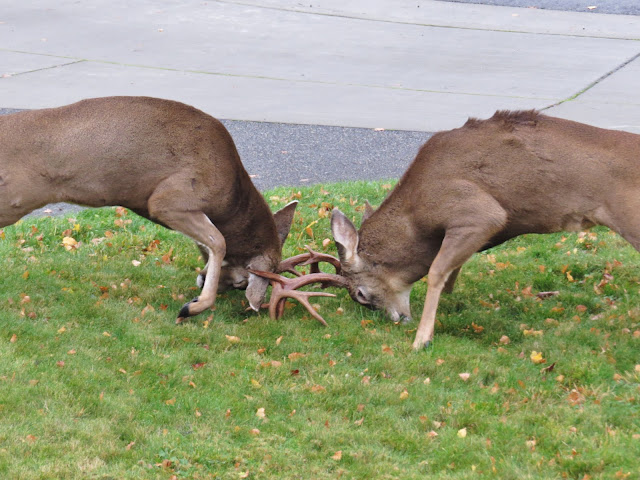 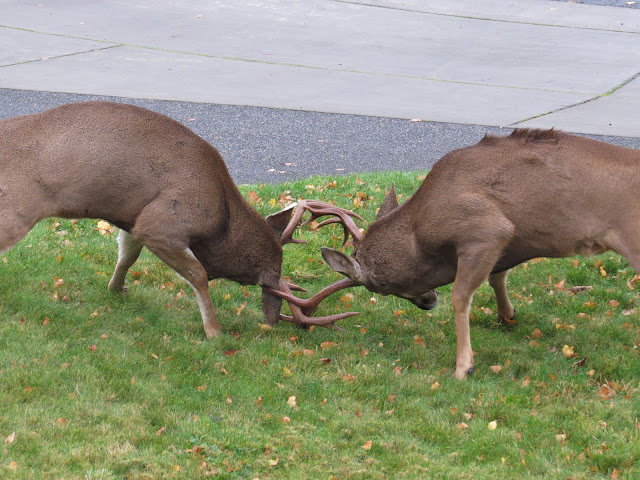 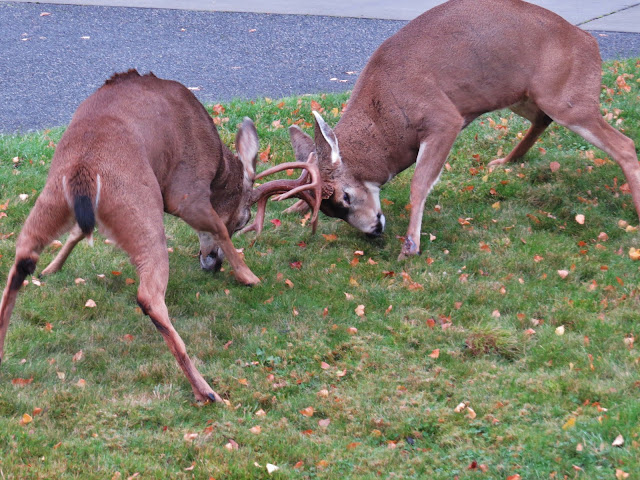 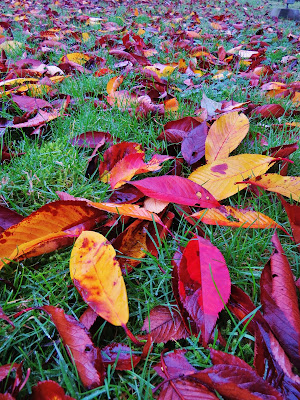 The fight lasted for  longer than I would have expected - then the challenger  broke free and ran through the back yard , smashing into the bar BQ- the other right behind him , charging and threatening across the  cherry leaves  on the ground that look like the aftermath of a wild party.

At one point there were seven deer in the yard ,  the yearling "wives" had long gone, terrified. ducking, and scooting!  The other's placing bets, I assume.

The days of peaceful resting under the tree, chewing for hours in a spot of sunshine are well and truly over.
This is the end of rutting season before every deer tucks in , waiting for the thaw and  fauns.

The flicker watched from the plum tree, very still for the longest time- He may have brain damage from pounding out his  dating profile against our  Chimney,  Our neighbors covered their chimney with wire mesh after the flicker made such a hole that the rain made it's way into the house. Living in the natural world- here in real estate. I feel lucky. 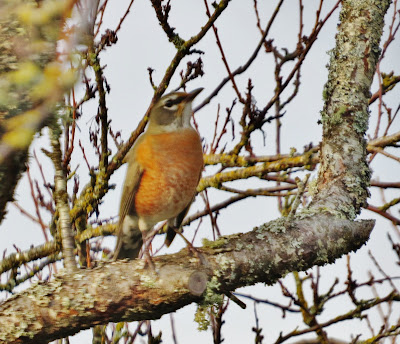