today for the birds, rare shadow in the house 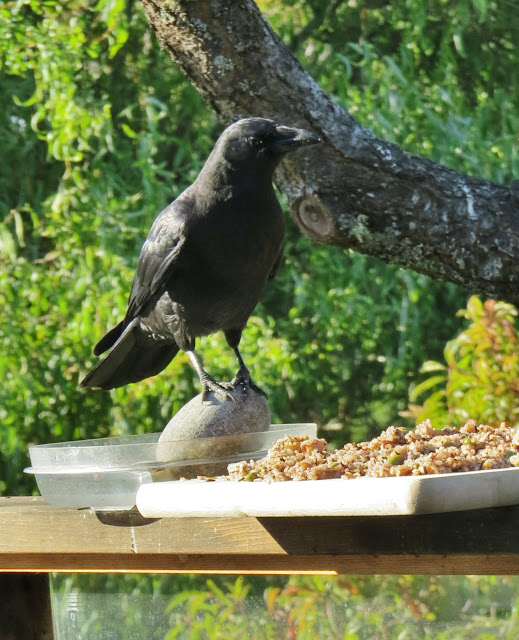 My crow family, the three siblings are still coming around. The parents are off on holiday , I guess, the kids are on their own.
On the menu this afternoon: wild rice, flax seed, macadamia nuts, edame,  a melted cube of butter, the  sort that is handmade  from pasture grazed cows with names like Lucy, Mary Belle , Peaches and Cornflower. The crows know that I am trying to buy their friendship...they have got my number. What they do not know is that I have a vision of them saving my life one day or dressing me like Cinderella in that  good morning scene.

It is getting so cold-ish all of a sudden, I  do want them to be well fed, for, as they say in Throneland, "Winter is coming". Be well little Crow family of mine, you needn't bother with anything else, but dressing me in the morning would be something to write about wouldn't it. 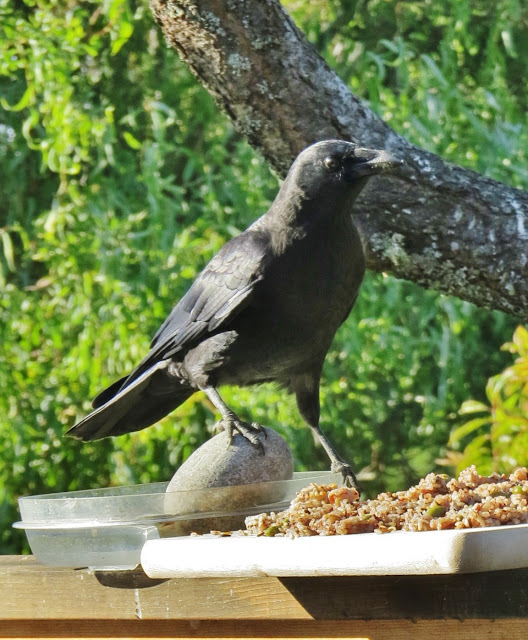 The gull just could not stay away, though I put out the UNwelcome mat . He is not quite so brazen and keeps his distance, no more banging on the door.
Manners are everything. He gobbled a fair amount and left large splats everywhere, of course, a very good processor of food! 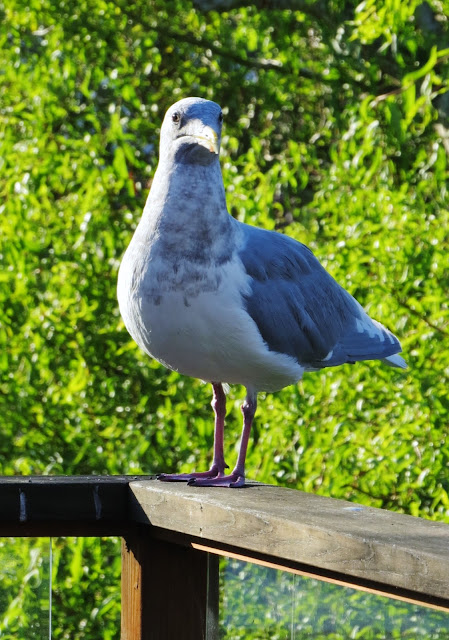 Stella and I are getting packed to go to the desert on Sunday. I have nothing but Pacific Northwest  clothing, WARM, so I may have to just spend ten days in the pool, Oh darn. If you don't hear from me, you will know that I am comfortably numb , neck deep. nude in a warm blue pool.

The sun showed up today and sent unusual jesus rays through the house.

Shadows such as these have never come to this house  until today. perhaps it is an omen...I got stuck into some wild conspiracy theories on you tube by accident this morning.
They are hilarious, but If I was stoned or otherwise mentally compromised I would totally buy in!
Trump a time traveler, along with Pence, and particularly Baron! " he is NOT autistic, he is ....elsewhere"....cue Alcoa Presents music....or some other music that gives you the heebie jeebies.

Google Ingersol Lockwood if you care to know the spookiness of  mysterious goings on...I will not link it because you have to REALLY WANT IT!!

Weird and whoa ,dude! AND an utter waste of precious brain cells. 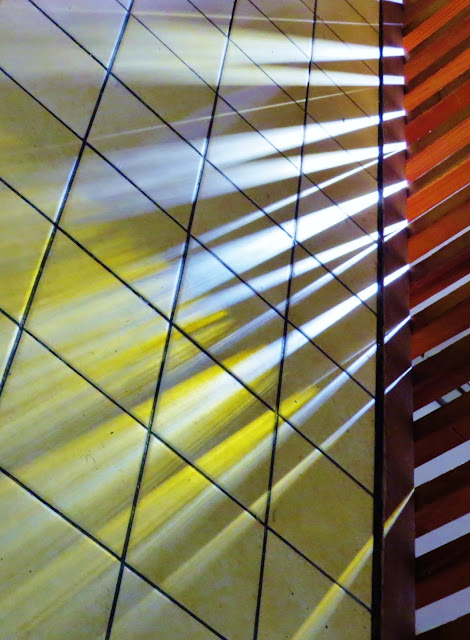 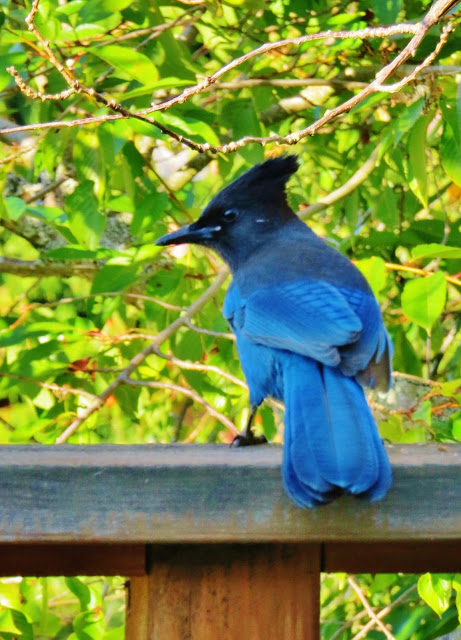 The  jays are always here, Sometimes the tree is so full of them it looks intentionally , garishly decorated . Peanuts, you see, huge bags of them from Cost Co, causes many a ruckus here, fighting over them, birds and squirrels-  three squirrels  in the house  yesterday  whirling around each other and the bag of peanuts--They sounded awfully vicious - I opened the door wide and told them that if they could not be civil and quit  acting like wild animals I would  have to ask them to leave,   they did.
They came back, one by one. Much better behaved .Like the gull, Manners, friends, manners!
makes all the difference. 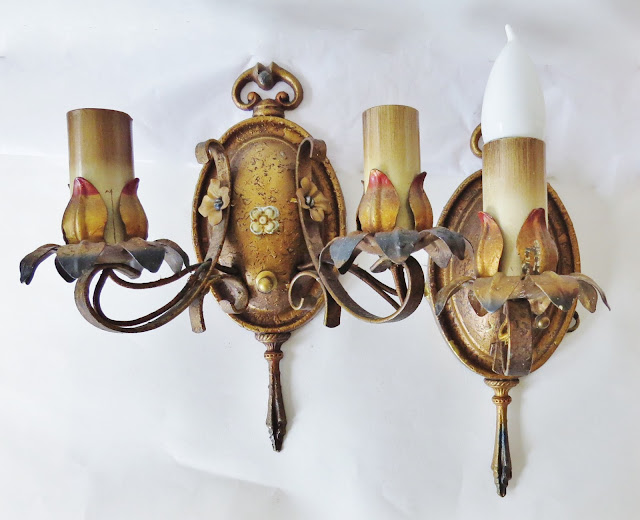 Mr. Man is clearing out some of the trash in the basement at the office, These light fixtures from  the office /house. built by the coal company back in the early 20's ,for a prized worker, probably an executive, were in a box headed for the dump. He had the good sense to bring them home first!
They are not my style, so I cleaned them up and listed them on ETSY.

The Moorish one below is  pretty  great, if you like that sort of thing.

So, selling his practice has / is taking well over a year. It is really sad for me but I do not let on. He needs all the encouragement he can get .
We have LOVED that house/office and the sweet little tree top apartment attached. All of our children and grandchildren have lived up there during university days. Separate times, mind you, it is a one bedroom...The yard is huge , like a park and has been well maintained by a dear friend for years, A plant whispered, he is, His earth sensitivities  are acute .
Not liking this change, It is a really BIG one. The last chapter pretty much. Now I want to start reading backwards. Rewind. Do overs. 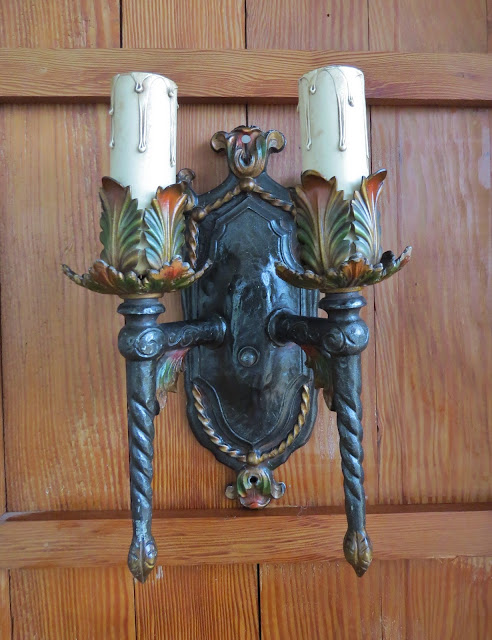 My friend , in whose shop  I had a booth for years, loaned me her dog hamster for two days and a night.  The dog is named JUNE, and she is so tiny it scares me. She is not really a dog, no resemblance  of dog in her, so far from wolf,  like a different species.

She is kind of nervous, very sweet and easy to please, but has had a rough year. Her humans had to close their shop due to a best long life friend embezzling their shop away, then the human man , a Vietnam war vet, developed glioblastoma , from agent Orange. 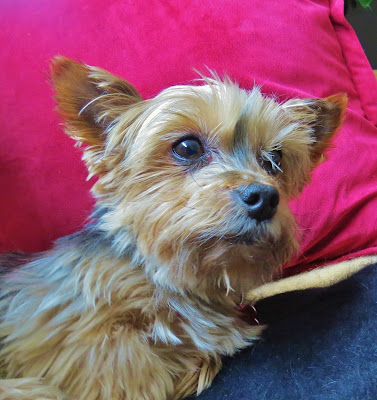 And so, He died rather quickly and mercilessly, Quicker than John McCain- There are so many vets who have died from Glioblastoma but neither the VA nor the government would recognize that the cause had been agent orange. It took months for my friend to have it recognized as the cause of death, to finally get their attention.
Then their daughter moved into a dorm at University, all quiet on the home front, except for JUNE, She has developed an incessant  high pitched squeak, a cry really...annoying but , you know, poor little girl has been through a lot of  changes and puzzlement's..."where did my humans go?" 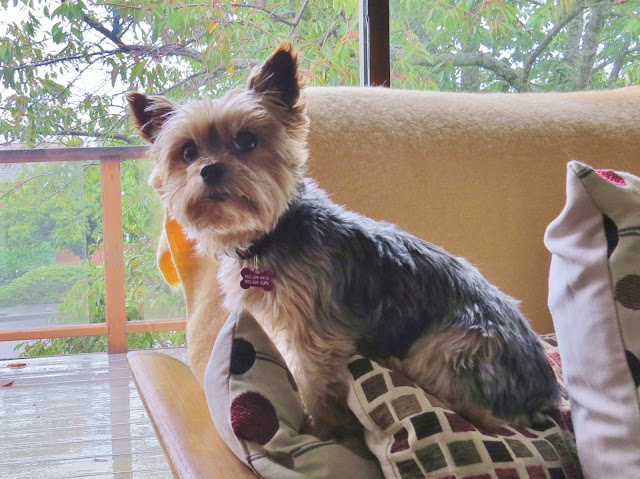 Of course I babied her as much as I could, gave her the best of whatever I could offer.
She liked to watch the blue jays steal peanuts from the squirrels.
She liked to be cuddled- she liked the heating pad, she had a pretty good time.

Her head fits in the palm of my hand, I tried to erase all of my palm lines with some sort of eraser on my editor, just in case there is a palm reader out there, They say that your palm reveals all, and I am sure they are right-  "not today, palm reader, not today" My secrets are between me and this dog that is not a dog, I  have told her everything, the more I told the less she squeaked. Win win. 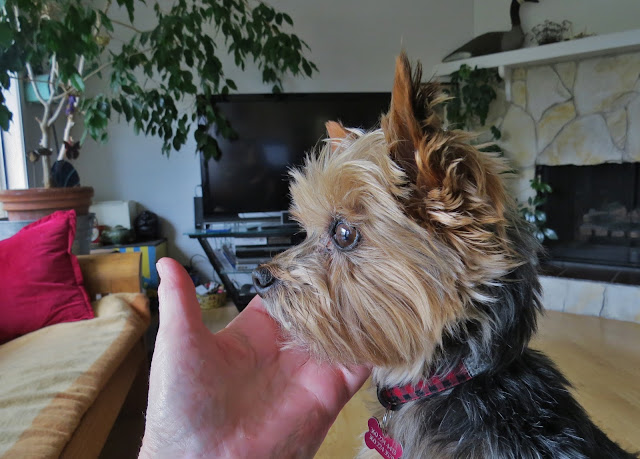