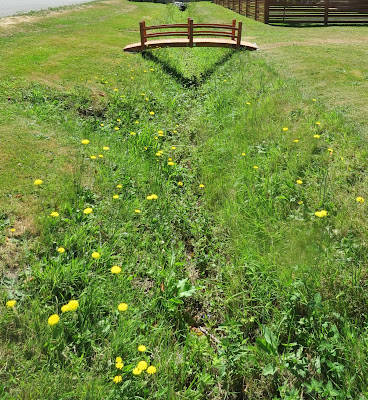 Dry ditch, not a drop of water. Summer has been strange - a total write off- Not many positive memories  made about this one.
Healing a broken neck, staying put though  yearning for adventure- the heat, and now the smoke that seems to be an everyday gasp for air, Mr. Man rigged air filters, Cost Co-3 filters for the price of a half filter from Home depot- He taped  them to box fans. Doing a pretty good job- after only three days the filters are brown and need replacing already but we are breathing a bit better.
It has been surreal- Birds are silent and hiding somewhere, the deer have stopped roaming, It is quiet out there. 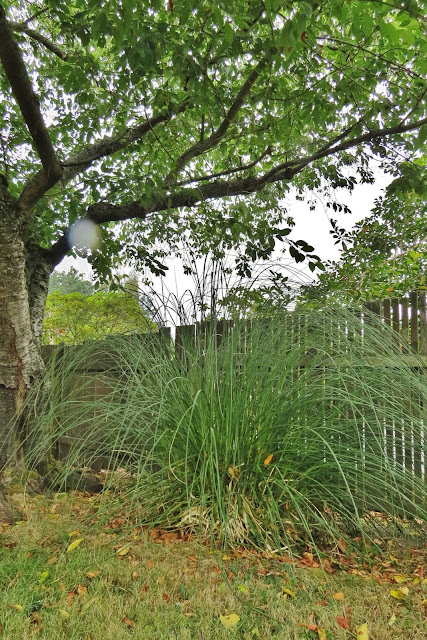 This morning in the back a smoke goblin invaded my camera. I was taking a photo of the Pampas Grass that has been there since the late 70's , and this is the best it can do!
No plumes, just razor sharp edges, as I found out the first year in this house, thought I would make a basket out of the fronds- I really am blond...

Below are our tomatoes. Deer dinner. 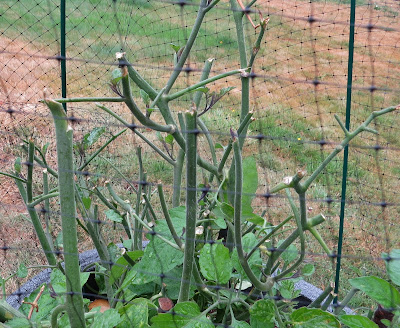 hearty autumn flowers seem to be thriving in spite of no water and no air
and YES it is Autumn. For me, summer did not happen at all.
This morning  the furnace  fired up! 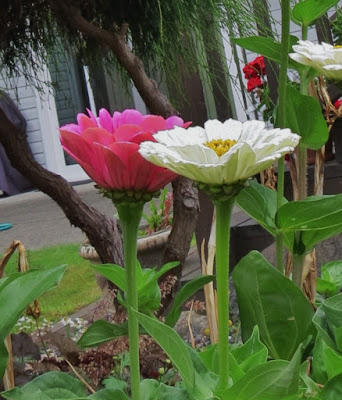 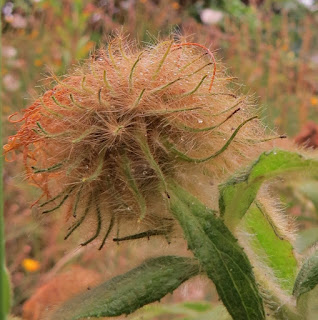 Everything is the color of that fuzzy plant, Smoked out, dry, crispy, a non color.

I received my interview specs from Randy Rainbow in the post this morning
Ready for more political show tune shenanigans. If you are not familiar with Randy Rainbow you MUST google him and watch every one of his "productions" - He is a marvel!

Visited the message chicken a while back.
She always has good advice. 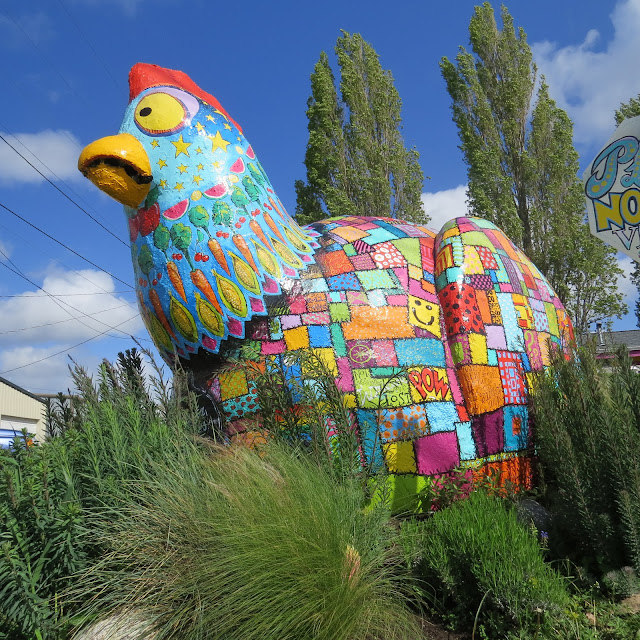 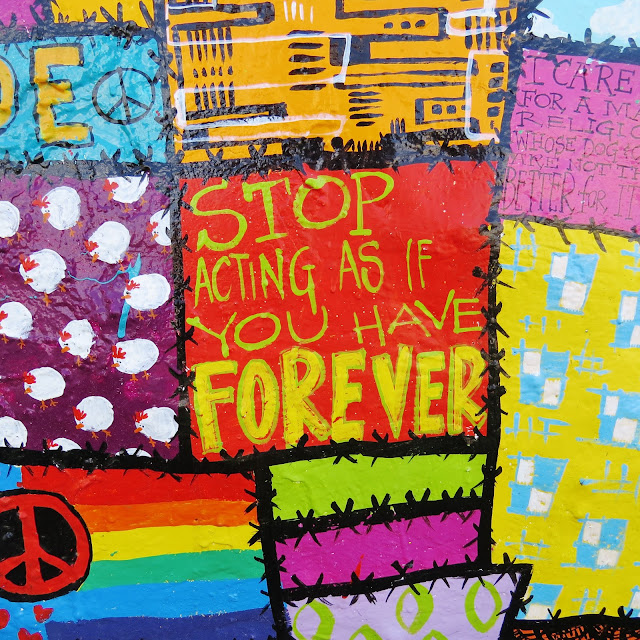 Time is nearing the last quarter of the last quarter, for me, anyway. Have I done what I loved doing? Did I love enough? Have I left a tidy place behind? Is my underwear washed and put away? Have I made a positive difference to just one somebody somewhere?
Dunno, but know this for sure, I have had a blast this go around!
I can sit back , I suppose,wearing my judgy Randy Rainbow glasses, slowly reading "LIFE' By Keith Richards, thanks to Ms. Mary Moon. Oh yes, this book compelling - sends me to GOOGLE every three sentences or so, to look up this and that- to go to you tube to listen to musicians so good- I listen over and over again, It has taken all summer to get to the almost end of this book, which I do not want to leave- hanging on , backtracking, googling,
I want to stay in "LIFE"s world for another long time.
Keith is the man, god I love him so!
He is a great teacher - how to have a positive attitude in the face of all sorts of damage and danger- AND, probably best of all, he has saved me the hassle of drug addiction. his writing so clear that I have experienced it all on paper, saved my nose, saved my money, saved me from the horror of withdrawals. A very generous writer! 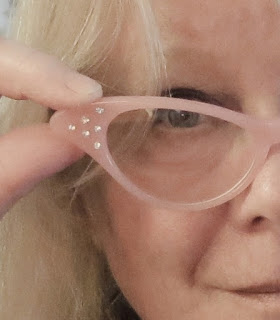 No air, stabbed flower, black jade, Eat something- it will make you feel better 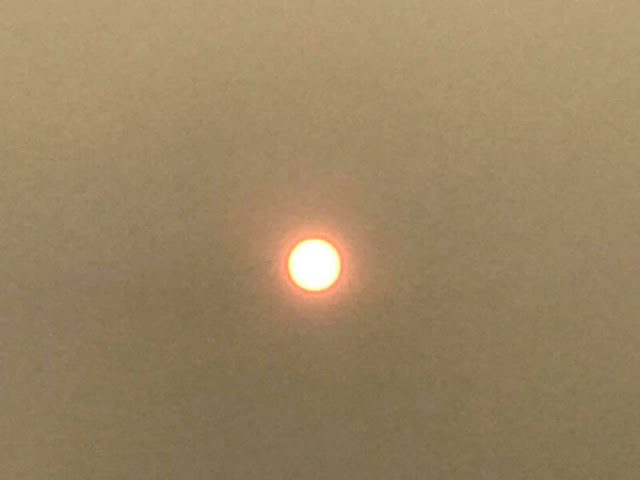 Third worst air quality in the nation today. Staying in, coughing, eyes burning, stabbing a LARGE flower into shape to wear in autumn. Looks like it has POX. 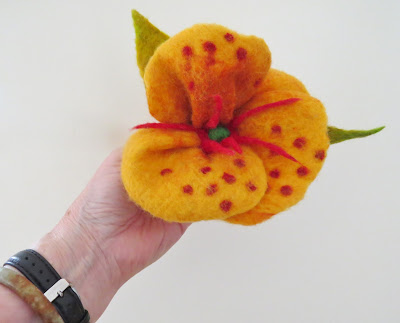 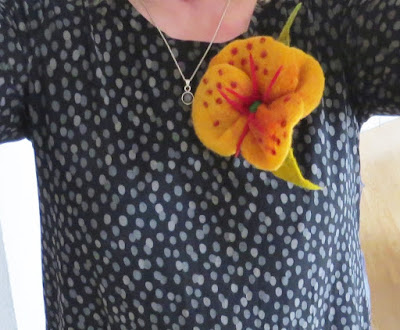 Found this highly polished and cut ,by hand , black jade pendant my Dad made for my Mom in the early sixties. He rock hounded a hunk of rough jade outside of Jeffery city, a uranium mine town, where everyone died  of cancer. Wondering how toxic this magnificent pendant might be. It is very large, I would never wear it but can not get rid of it either- because I remember- Dad in the basement with his diamond saw, diamond sanders, turning what looks to everyone else as a hunk of dirty rock into a fine piece of jewelry. Wearing his fingernails off - hand polishing this very hard rock. 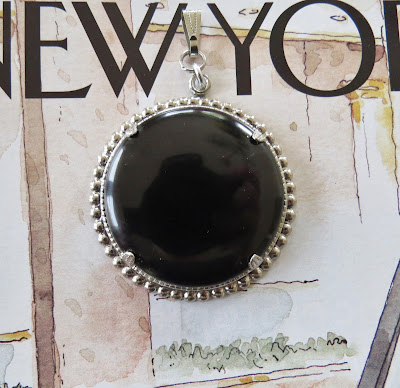 Thankful for having pretty great parents. A good easy life full of curiosities and adventure. Living quite interdependently in the mountains in the summer.
My parents did travel around toting us, my brother and me, in spite of us groaning and complaining and having to stop every thirty minutes for some lame excuse.
When ever I felt terrible , riding around in the back seat, getting car sick, Mom would hand  something amazing  to me, out of her endless bag of tricks,  and say, "Eat something, you will feel better",I usually did, for a little while.

Fruit on a smoke filled dirty brown day, is refreshing.
Feeling better already!
Eating may be better than breathing... 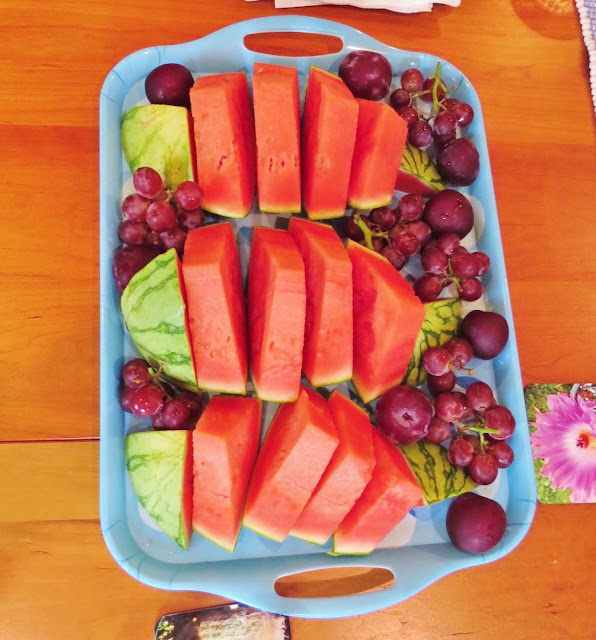 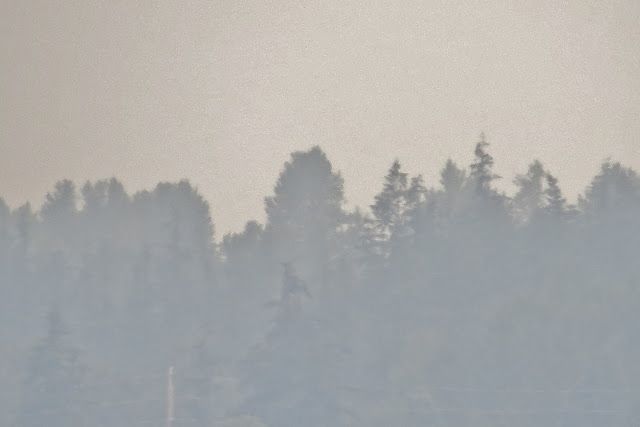 Looking out over the bay the smoke is thicker than yesterday and will be even more so tomorrow.
Getting my London cough back, shallow, irritating, eyes burn- They say to keep everything closed , windows, doors- and to leave the floor undisturbed, that is where the residual settles, so just leave it for a few days . After the smoke clears then it will be OK to clean the floor.
I can see across the street pretty well, but anything beyond their roof top is a blur. 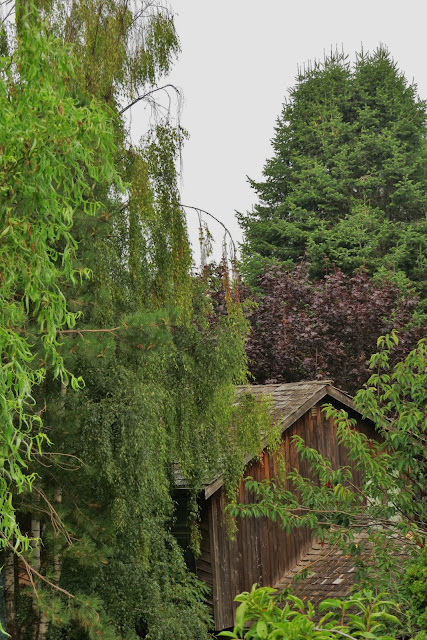 and in the yard. The babies have lost their spots and knock knees. I keep meaning to buy apples for them, They must be hungry, I have left the hose trickling so at least they have a cool drink. 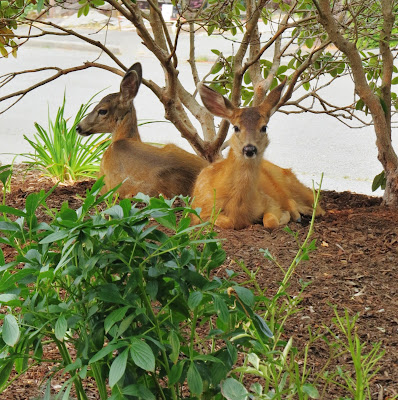 They are so used to people now, they do not move even when I get close. Their ears go back and twitch, but that is the only reaction I can get out of them. 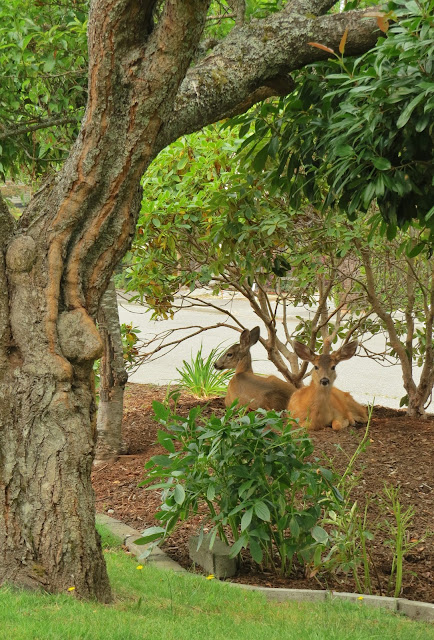 Rummaging through old papers found this , The red star points to My Great Grandpa's roll in  cowboy / Indian shenanigans. 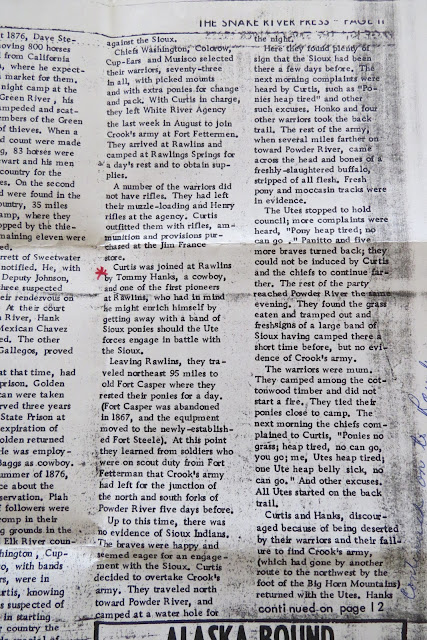 He was born and raised in Gloucester, Not sure how he made it to the States but when he arrived he and his brother hooked up with the Mormon folk and trail blazed across America to the promised land, or whatever- By the time he got to Wyoming he ditched them claiming that they were crazy as a bag full of rattlers.
After coyboying for a while- took a bride from Sweden, settled down , sort of, and became Marshall . 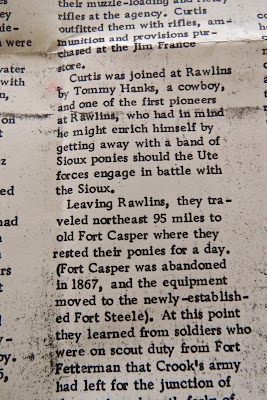 This is their shot gun house, in the dirt of the new BIG rail road town of Rawlins, Population must have been something a little  over twenty.
They look well fed and comfortable .
When my Dad was eight years old, Grampa  said, " Let's go on a trip to Utah" grabbed little Dad by the hand, boarded a train and off they went .  " this will be fun, I sure do love my Grampa, maybe we will go fishing, hope we catch some rainbow", When they arrived at Gramp's brothers house, they were greeted  warmly- then Grampa said, "  Hello, brother, I have come here to die"
Scared , shocked, surprised and traumatized, little Dad stayed and Grampa true to his word, died a few days later.
Dad never did tell me how he got back , pretty sure he was just loaded on the train alone , and pointed in the general direction of home.
Without Grampa. 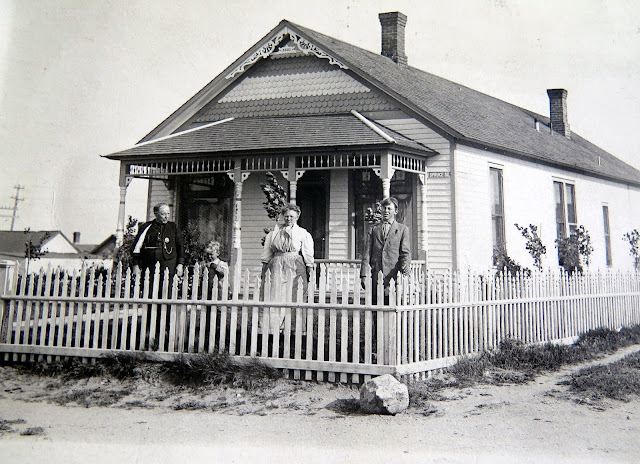 Tough folks back then- living in Rawlins Wyo, was challenge enough. When their youngest boy child was fifteen, he was reaching for a coin under a RR car, the train rolled and off came his arm! All the way to the shoulder. Why did he not bleed to death? Medical aid was so primitive then. He lived to be an old man and very capable with only one arm, A great photographer, married a beauty , moved to the Washington coast. where he died not  that long ago.
His remaining arm and hand became impressively  developed. His fingers ,like tree trunks, maneuvered even the most delicate tasks, threading a needle, latching a necklace, buttoning tiny buttons...
Like I said, tough folks, back then. And I whinge at a hang nail.
at August 19, 2018 9 comments: