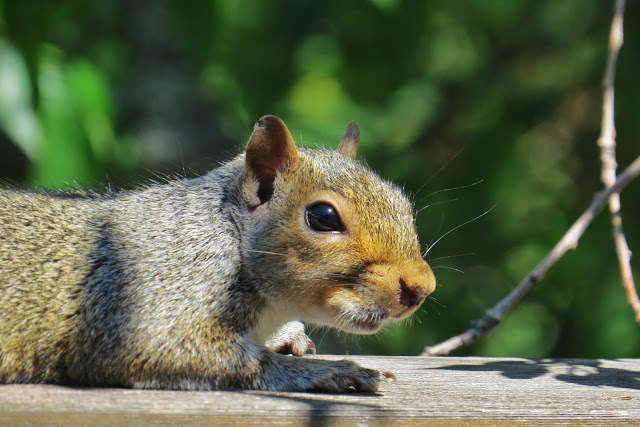 The baby girl squirrel is so adorable. she is timid and polite but bold enough to come in , keep me company for the price of a nut.
Makes herself quite at home.

The house bathed in light! I am loving these dry bright days !
I can watch the willow growing daily ! It is really top heavy, loses major branches in winter snow, and is looking like it wants a summer hair cut. I certainly am...but can not have my hair cut until my neck is better. I go about looking like a homeless old woman, stringy thin hair, damp from the extraordinary heat...( 69 degrees)
(another eye roll....) 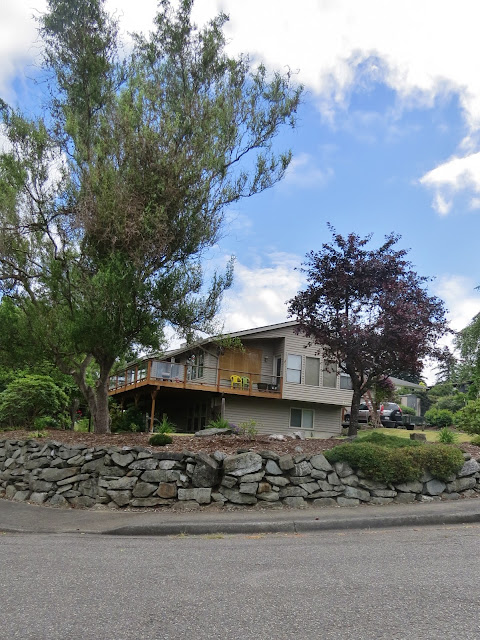 Comfy on the railing, She snoozes while the crow dips cheese into the bird bath to moisten it for consumption. Clever Crow.
Endlessly entertaining , watching my crow and squirrel. 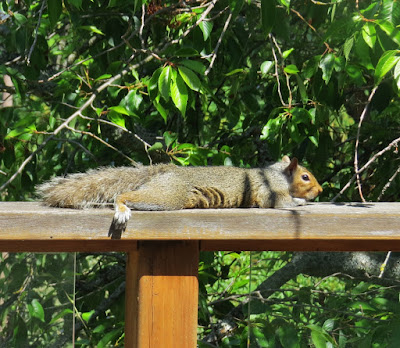 Bringing wool back to the house to stab, though I can not get too carried away with felting yet, Feels like there is a serrated knife in my neck, so I have to just do a bit at a time. 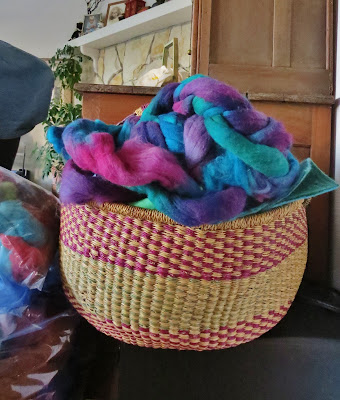 Flowers, always mindless and easy to form. Making things for December already because as you know, it all takes so much time! Can not put off until December first to start thinking about the Festival of Lights where I  hope to sell  out to a huge crowd. ( like that ever happens in this town!)
Flowers are people pleasers,  though, even if they do not sell, they are good to give away. 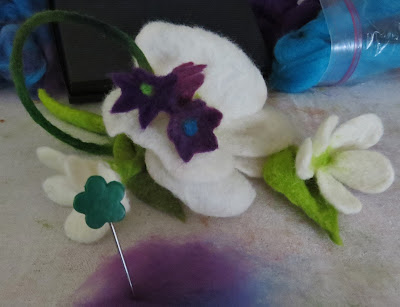 At the front door.
Pale Lobelia  and geraniums.
So cheerful.
Summer light is GOOD! 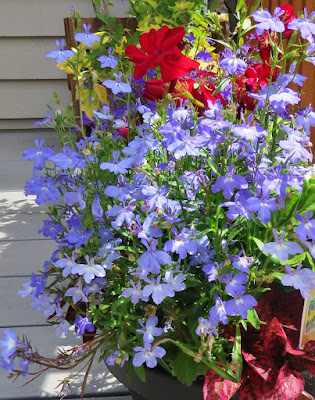 The light usually fades to gold at about ten o'clock pm.
The glow at that time is moody , and quiet.
And WOW haven't we all been in a funk as of late.
Feeling as though the light is slipping from this nation like water pouring from a wide mouthed bucket. 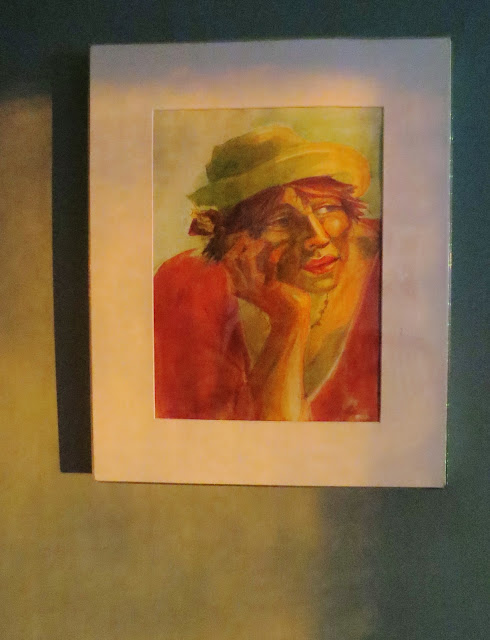 This , is good advice probably...
Found it on Mildly Offensive Fiber Arts page on FB. (MOFA)
Somebody must have had a mother with bad or  no eyebrows ... 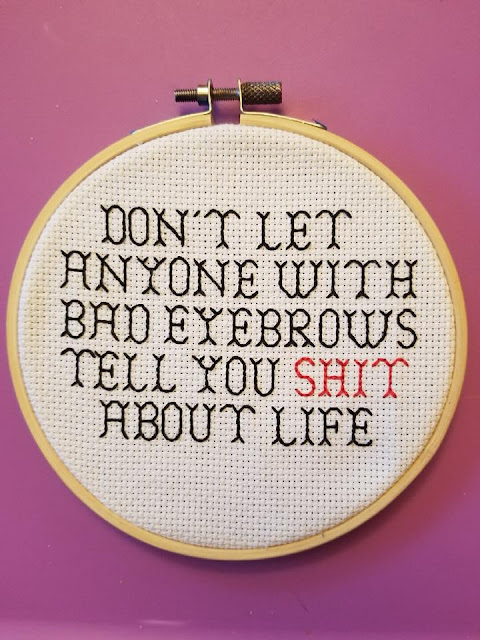 Take note...here is my maybe bad advice- get out of the country , NOW, forever if you can...This is likely the point at which German's realized it was time to leave before the borders close in ...
I am waiting anxiously for November's elections to see if we are more fucked or just slightly more fucked.
Putting money into
Canadian account and possible one in the UK.
Shit's getting too real, folks!
Enjoy your squirrels while ye may!
at June 23, 2018 12 comments:

a post worth the read- in a good way


This ^^^ is an American story worth reading.
The author is an astronomer, teaches science and astronomy at the U.- a straight shooter, no time for nonsense although he does have a facebook page of nonsense-Whisker Tango Foxtrot- a collection of absurdities from around the USA. My forehead red from the slapping!
Anyway, this is a nice offering for the day...when did your people invade? 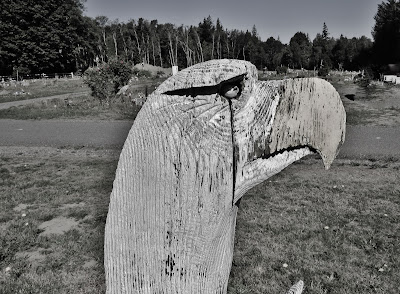 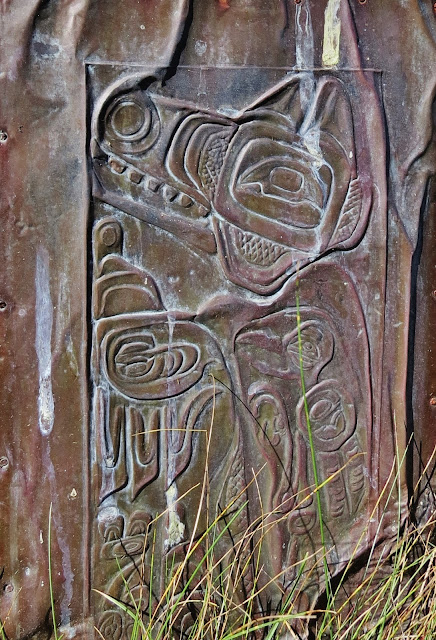 thumb is not green, the price of a neck, the orange turd 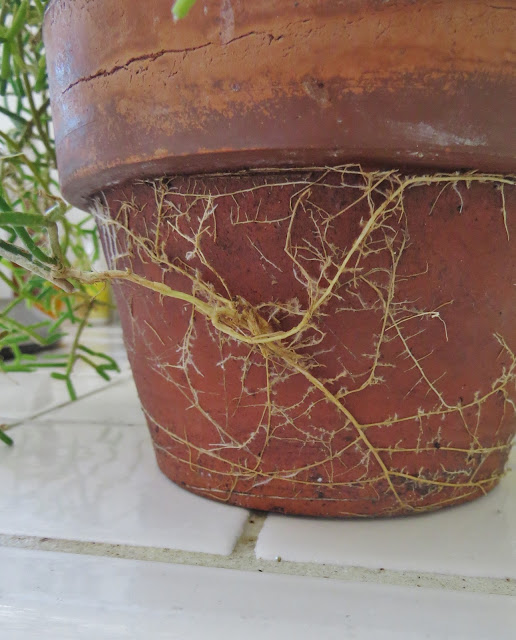 While going about my business neglecting my plants, I noticed that one branch of  my Hatiora Salicornioides, or Dancing Bones, plant had wrapped around the pot , thirsty, trying to live and grow. I have had this plant since I was 24, It has not grown much but is healthy in spite of me. It has been a remarkable plant- it bloomed only once, solid white flowers all over it in a dense cushion, on the morning of the first anniversary of my Mother's death.

Below ,  roots growing in the water of the bowl holding the Schefflera arboricola. 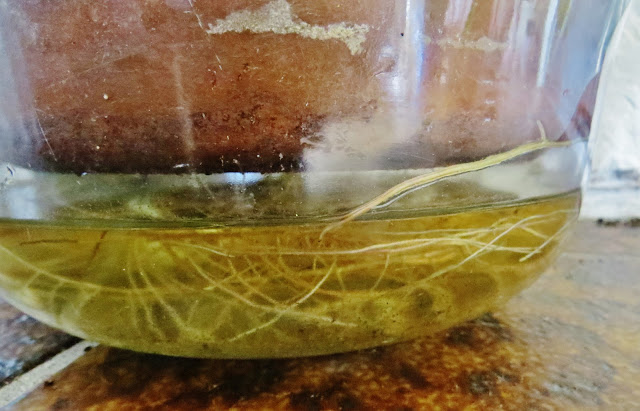 Also with a will to live, It was a four inch stem when I stuck it in the dirt not that long ago it seems, but you know how time morphs...So there it is, if it gets any taller I will have to shift it to another world, As is , it fits perfectly by the stupid gas fireplace.
When we first moved here the fireplace was functioning and lovely in the winter, We sometimes used it to roast apples. But for the sake of cleanliness and less smoggy air, we switched to gas.
It is never on, it produces no heat and it hisses.
It is stupid. 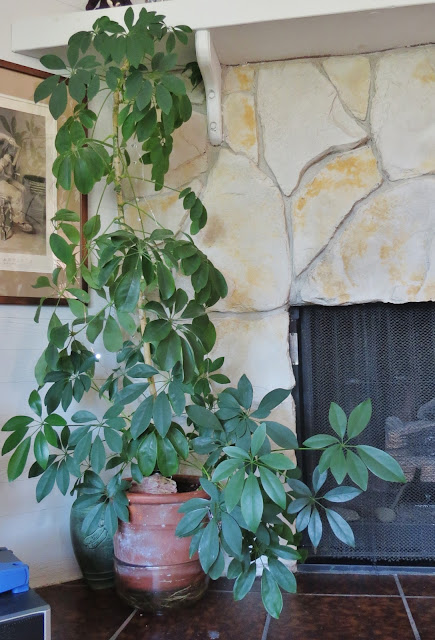 The fig tree was a rescue, the tallest branches have been cut so that it will sort of fit in the corner. My hope is that it will grow well and big enough to cover the television.
When I got it it was bare sticks, covered with some sort of sticky goo.
My neglect has paid off with this one!
It had a blue jay in it today, and the baby squirrel likes it. so I guess I could call this one a success. 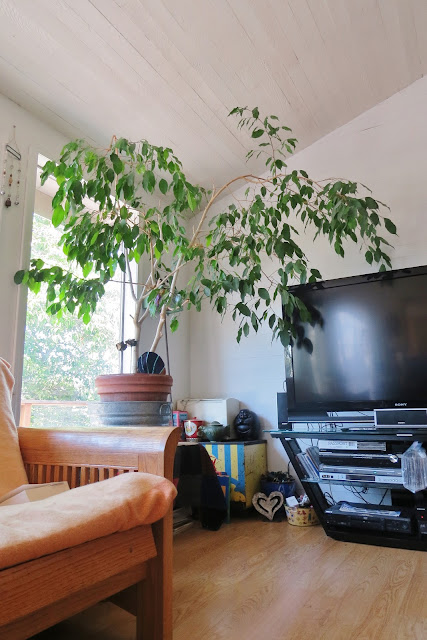 This whopping sum is what my neck has been charged so far, there are still X-rays to be taken and fingers crossed , all is going according to plan. 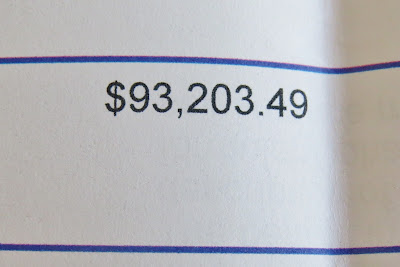 However, and this makes no sense to me, the sum below is what I paid.

Insurance and medicare, Brilliant.
Watch tRUMP put the kibosh on that too,  wreck the universe Orange Turd! 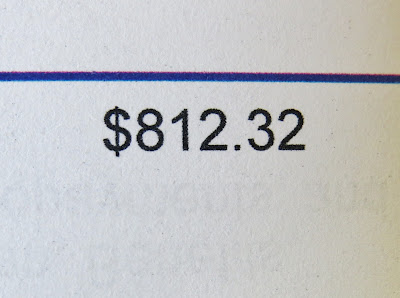 Just listening to radio , BBC world, news from Canada: Twelve year old boy calls police to report that his parents had tried to serve him SALAD!!!
The police arrived in good humor, and explained to the lad that that was not a reportable offense.
Oh Canada- I love you.
Sorry we are at war. but, you know, Justin a bit more of a leader and a truck load of good looking, The Orange Turd just can not handle that- so...war it is.
Sorry
In the middle of the night, the radio played a recording of the babies in tRUMP cages, wailing and calling for their Mama's. The evil just grows , feeds on itself- out of control and astonishes every time, but THIS, this is the ultimate evil, of course it is.
Not like the USA has not been skilled in this  sort of horror before .
USA - a dismal history, this time it is on our watch, my GAWD! 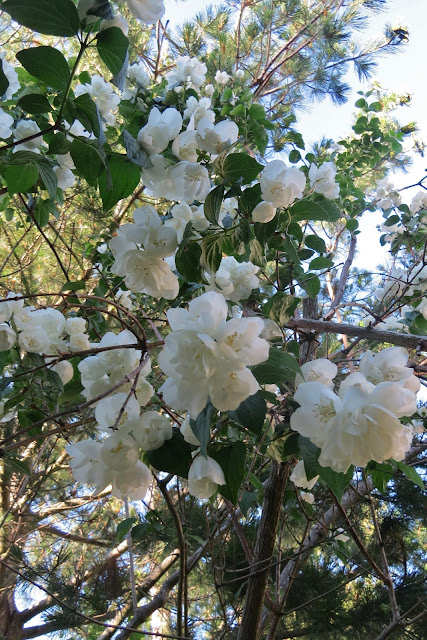 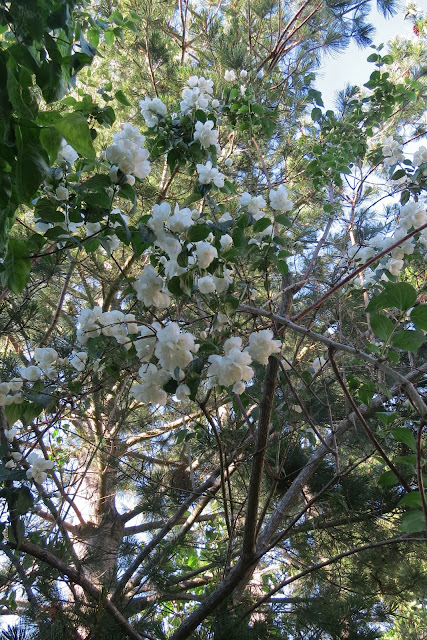 Walking Cubby , I pass my friend's house, She is one of two in the no eyebrow club, of which I am the other member. We met years ago when I worked for her husband  at Toad Hall , an organic hippie pizza and home made root beer place, where if you did not have enough cash for food it was given to you. Back in the good old days.

You can barely make it out high up in the massive tree next to it. 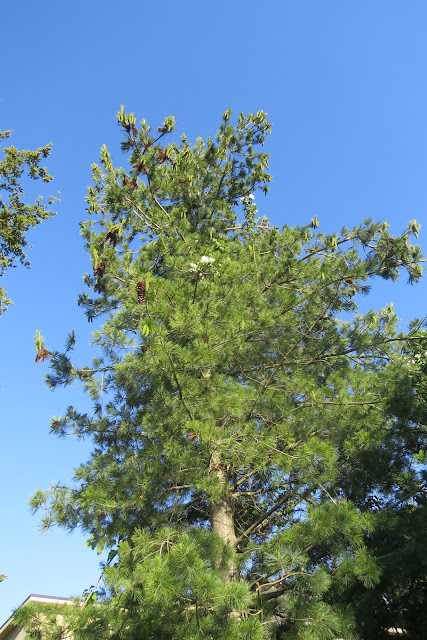 Cubby is only six year old, still likes to play but walking is minimal.
He runs out of gas readily, good thing he only weighs as much as a bag of sugar, I carry him for a good portion of the walk.
He rests in tall cool grass when ever he gets the chance.
Admittedly it has been very warm for the past couple of days...I think it got up to 69-70.
a real scorcher 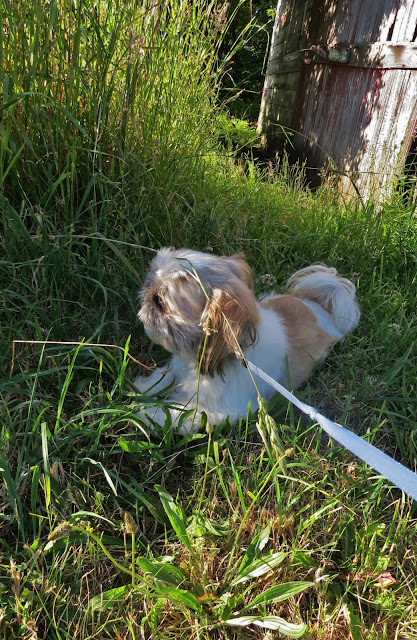 Missed the fire pokers when they were  at their best.
These are the sad left overs. 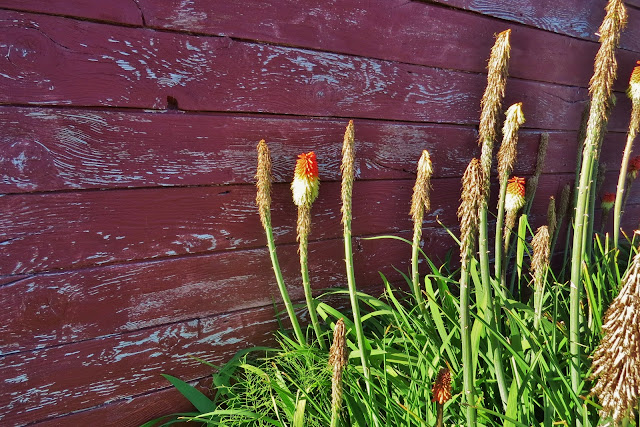 Garlic in my friend's garden, robust! 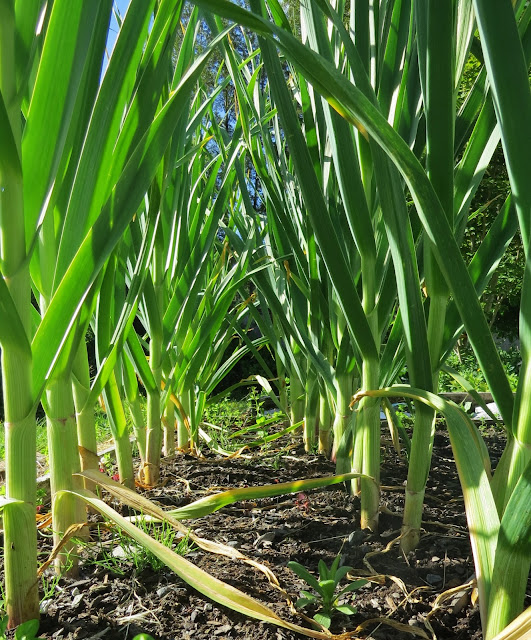 Happy leaves of a mystery bush. 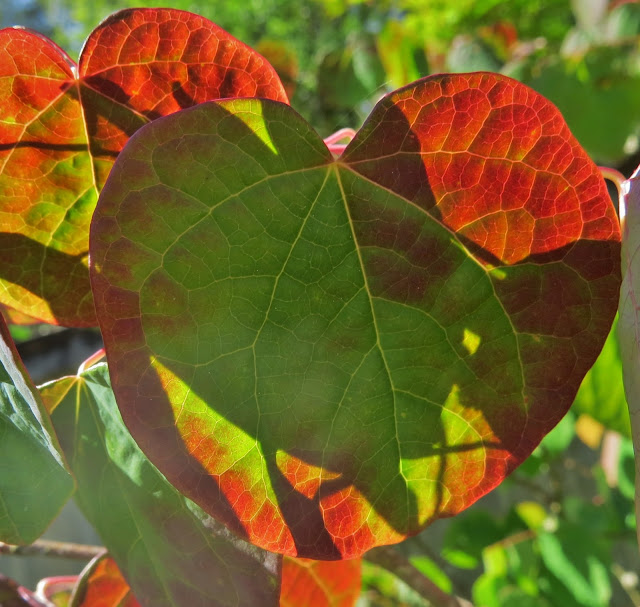 so, there you go, another rather uneventful walk, in the god awful heat!