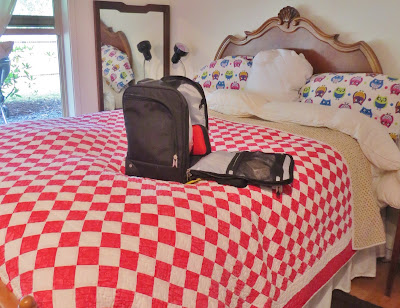 I am taking only one tiny carry on , plus my purse. I will be gone for nearly five months and can not WAIT to get out of this country- already dreading coming back.
There are a few more weeks to think about how to deal with three seasons. Last fall in London was really hot and humid - November was perfect -December the weather became noticeably frigid. What to take?
So, I have packed up my winter gear, my eye vitamins, my "Dead Man's Reach" coffee addiction, and a few items to give in these three boxes!
Clearly I will be unpacking these boxes and will  get everything into one pre- paid box to send to Sarah's address in Greenwich.
"Dead Man's Reach" may get the boot.
I was thinking about my travel gear - quickly wrote this sort of poem on Facbook this morning: 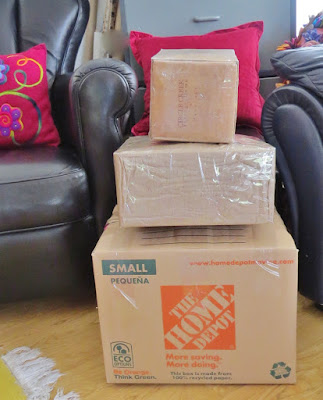 travel suit
must have pockets and
adequate fabric-an integument
while riding the shame train
from Cofefe to Brexit-
buttons are preferable
to mutable zipper,
buttons easily replaced.
it’s just common sense.
Lisil of
dark blending colors-
quiet, earthy-
of the old school,
Perdu
consideration-
when travel abruptly stops
this suit will be that of eternity
make sure comfort
is of primary concern
and pockets, of course.
must have lifetimes of pockets

With that in mind I can forget about most of what I have packed and just get down to REAL. What is essential.

Always tend to go overboard. Which brings me to this past blast: one of my exaggerated eras. 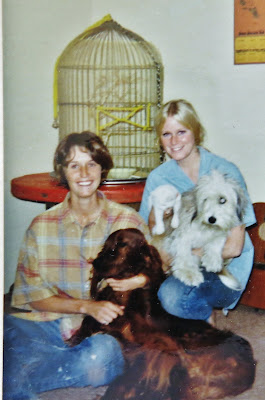 We lived in San Diego, rented a house with too many bedrooms. At that point we only had two dogs, Brandy the Setter, who, as a puppy got run over, paralyzing and squishing his back legs - he was such a lovely animal we nursed him back to some semblance of mobility , carrying him out to pee and poo, until he could sort of hobble on one crooked leg. What a trooper he was.
And Poppins the sheep dog, a gem of a girl- Eleanor the cat was a freak - ran away after a few years- to go live in the slaughter house , more to her liking.
Eleanor made short work of the canary, a little yellow funeral followed.

While driving out in the country , we saw  a German Shepard tied to a post, A man carrying a rifle getting ready to point and shoot the dog. We saved her, She was feral and pregnant though we did not realize. We loved her , she became docile and then BOOM nine puppies! All of them gorgeous, two died from her nipping the  umbilical cord too closely.  Then the tally was NINE dogs , one insane cat, and a dead bird.
The many bedrooms now full of dogs. My idea of heaven....at least for a while. It was unrealistic to keep them all, even after we had given them names and stations.
Too much of a good thing is still too much, so, like unpacking the too many boxes- we found homes for all but Poppins, Kept her and traveled on up the coast for more adventure. 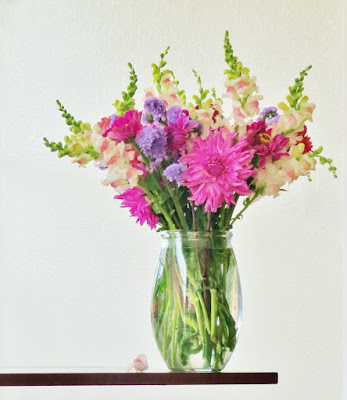 I really should not be driving. Some things one just can not avoid though, like going to Joe's garden when the flowers are at their peak, collecting a few and spending the last  bit of pocket change on a bouquet.
"food for the soul" they say.

There were a few close calls on the way, and some HONKS from other terrified motorists,
Next week I have two eye appointments and will order corrective glasses. FINALLY!
Still very aware of my buggered left eye- only one of the five doctors seen exclaimed "OH MY!!! Hmmmm" , the other's stick together as those in the medical profession do, they cover for each other like  the police force covers for their own.
Anyway, I am sure that with glasses I will be able to see across the street and must wear sunglasses probably the rest of my life, that's cool. sunglasses are cool. 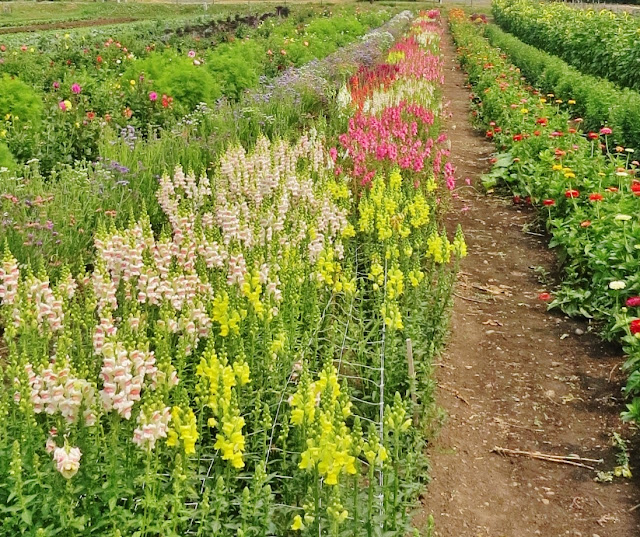 I am glad I am old...I am glad , selfishly, that I will not have to live through dramatic global changes -
Political fascism, the collapse.
Locally tRUMPISM has hit surprisingly hard especially for migrant workers and dickheads running for local office. Some one said that they, eventually , will get their comeuppance . 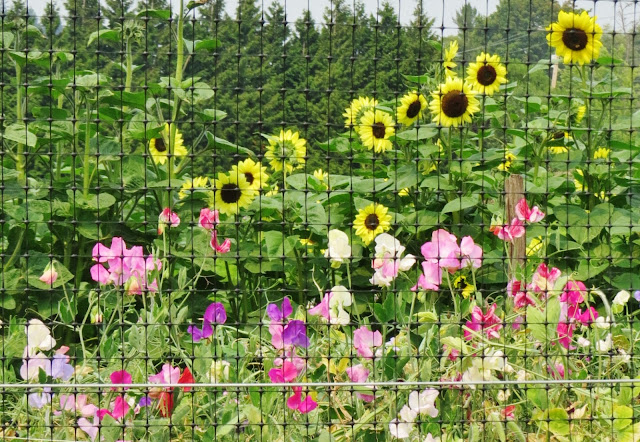 On the MOFA page, ( mildly offensive fiber arts) on FACEBOOK, a contributor embroidered what her daughter thought was being said when some one said "you will get your comeuppance", and that is my hope for this sad and dangerous administration. 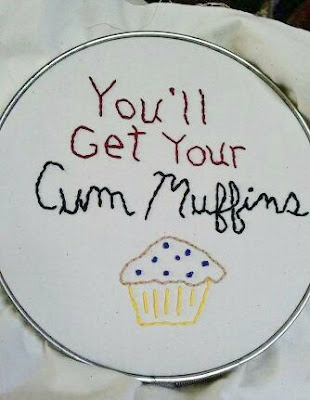 but I did not die 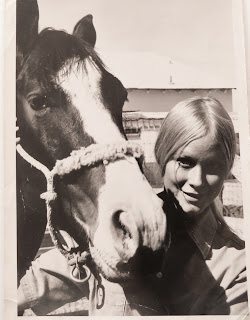 When I left  university , I drove to the Mojave desert in my funky little rambler sedan, and went to work and live on a horse training ranch. Loved the vast desert - loved  the horses-the ability to hop on the only horse that would tolerate me and my inexperience, Sunshine . Bareback I could  take off for hours. The freedom was  heaven - that sweet gentle  chestnut mare, humored me -  aware of my limitations , trotting smoothly, making me look like I had been born on a horse. Living on the ranch was a dream, and I had my own bunk, was fed home made pies, made about two dollars BUT it was not about the money was it. My job was simple, to ride Zero , the donkey down the ditches , opening up the valves for irrigation-I was thrown by Zero , many times- but I did not die.

I did a bunch of other stuff after the ranch, and  finally  made my way to England -worked seasonally-  lived in a hop hut, no electricity , no running water, Cooked outside on a fire where I washed clothes and bathed  in a livestock tub. The orchards of Kent, lush, abundant, on a privately owned farm by a creek were  idyllic to be sure, the company was superb- one of  our tribe was a traveler who came back every year to earn enough money to go back to Nepal. He brought Hashish  which we made into a custard to eat on freshly picked apples ,after a  long/hard days work.  Below is the hop hut, me with a kitten named Loki and a hen named Egg.  A wad of Opium offered by my Nepal friend, made me very sick and  dreaming for two or three days , but I did not die... 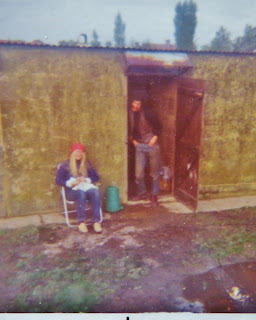 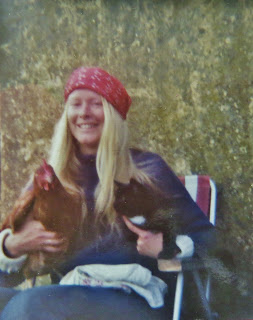 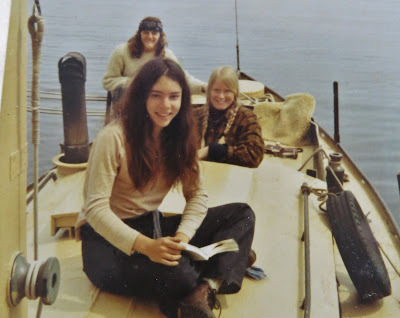 The most interesting place I think where I have lived , was aboard a sailboat sailing the sound. No motor, no electricity, a Neptune stove to cook on , which  barely kept us from freezing to death as the bay froze solid! This is a lifestyle I would not want to revisit, It was fun but demanding . I am a land lubber after all. An anchor fell on my foot , caused a huge infection and a foot three times what it ought to have been, the infection was serious...I did not die.

Back on land-  in a cabin in the village, with wood heat, where I grew my own food, canned it, traded it,  smoked a lot of weed, took classes at the U, got a degree- all
typical of that era and the hippie town in which we lived.
Earned some cash for travel.
Went places. 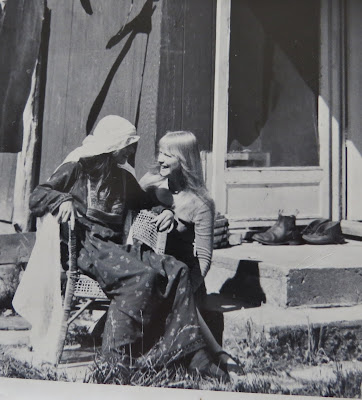 For  three months I lived in a haunted house in Melbourne Australia. I am holding a rambunctious puppy, because the ghosts would not leave and the puppy was freaked.
Another adventure I would not want to repeat. The ghosts were depressing and I felt a little bit insane...but I did not die.
Came back to the states- 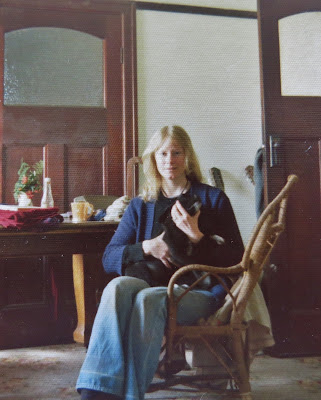 During summer months on the Olympic Peninsula I lived in a tee pee while working the trails, building foot bridges and clearing fallen timber,  without power equipment , using hand saws , heavy rope, and innovation. On a path below  the tee pee ,  there was an abandoned hot spring, and a  burned down lodge  from the turn of the century, a "danger" zone a "Keep OUT"  worth the risk- the soak in hot spring water after a day of "man" work in the forests, probably saved us. Stabbed myself on a rusty burnt spike,  wounded, did not die...

I've lived off the grid many times, prefer that lifestyle,...  and did not die.
Everyday  an adventure in nature.

And then....  -I joined society- I began to die a little-
the house in which I have lived for the past thirty  has served us well-house of choice for all of the children when Erik was growing up, Lively - easy to clean- predictable ...but
It is a sissy and lacks imagination - like a  tomb- children gone  - in an aging neighborhood- this house is trying to kill me with normalcy and central heating.
I may  just die. 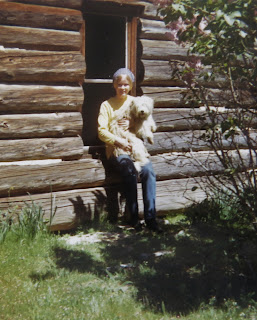 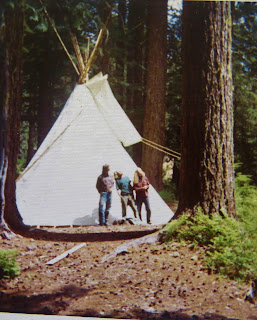 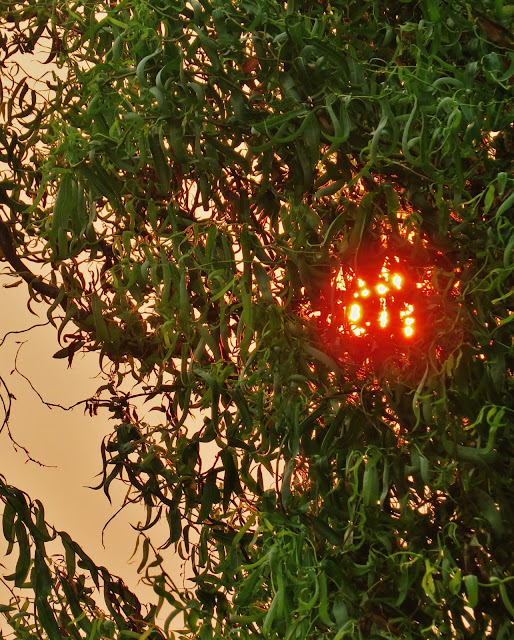 The smoke finally got to me yesterday after days of saying "oh it is not so bad...look at how wonderful the sky is, sometimes lavender, sometimes green, any color other than blue! So pretty!"
And look at the sun shining in a weird way through the haze and the willow...

NOPE, I am over it, eyes burning, headache, coughing.and sadness for the forests and all of the living things , burned out of their homes. 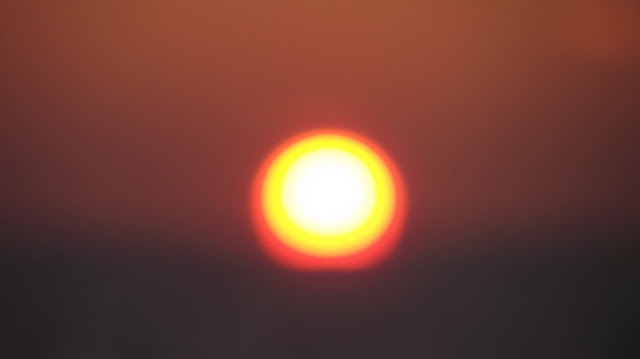 I did however get into my car and drive to the studio, still a danger on the road and got honked at a couple of times because I can 't see, anyway, I picked up the poster for art walk in September. Such a beautiful poster, I will keep this one! 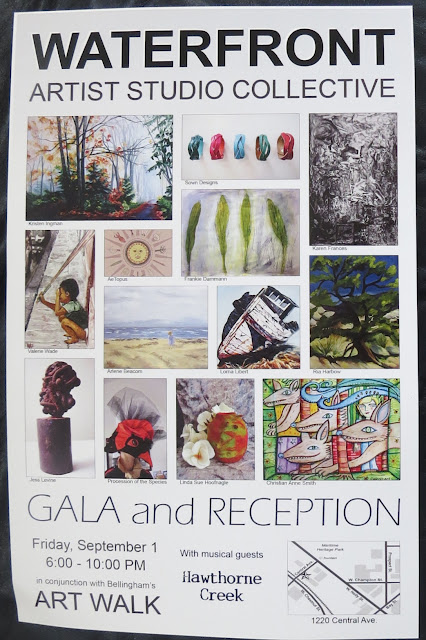 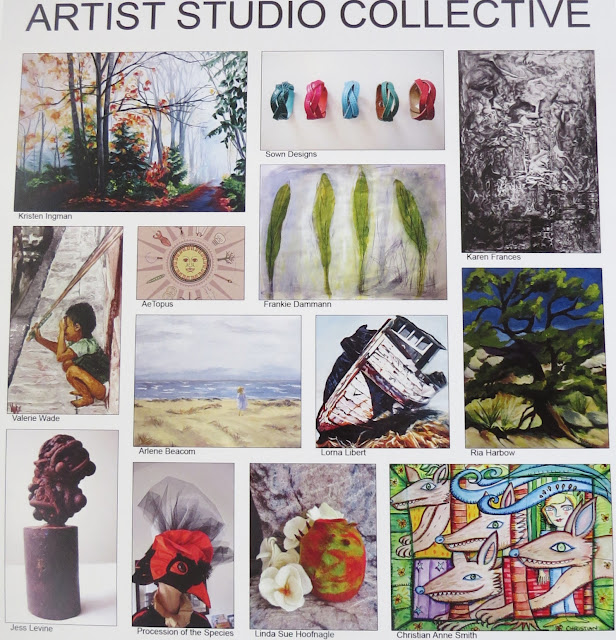 My friend Karen did this amazing work , so much better in person, it is EVERYTHING! I see a lot of Blake in it, though it keeps changing every time I look! The most intriguing , successfully inspiring work ! Sorry it is not a better  in this flat blog dimension.