What does Libby do? 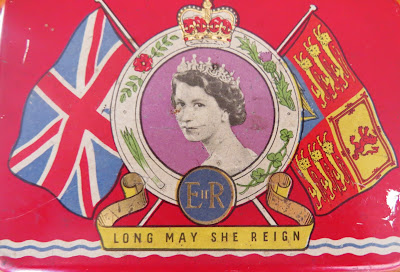 Queen Elizabeth is an illusion  of  stability in the western world, she has been here longer than dirt! I admire the QUEEN, though she really serves no purpose other than ceremony, and spending her subject's hard earned cash, and wearing excellent hats.  She owns the land, citizens are her subjects, She owns the sea surrounding the island  and all of the whales therein. She has the power to  rule against laws brought forth by Parliament, but never does- she would rather not deal with scandal-too messy . That is nearly unforgivable , given BREXIT and it has been said that she may lawfully remove the head of any visiting politician deemed unworthy.  Now would be a good time for her to step up. Always been a fixture in our lives and at 91, is remarkably going about doing what ever it is that Libby does.
No body is quite sure... 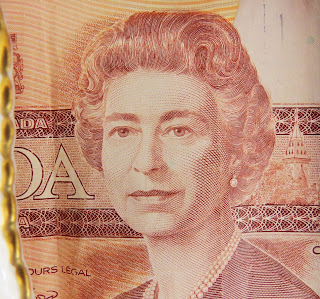 We spend her  face , on Canadian bills.
and on notes. that portray her  wearing an athletic mouth guard .
Unfortunate choice, Libby...just sayin' 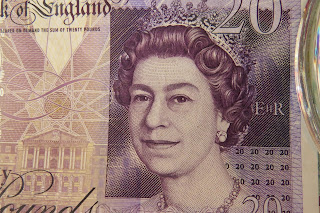 Her ubiquitous portrait is found on very nearly everything, She even has an action figure, which I am sure to obtain next time I am in London- A solar powered waving Queen , useless really, much like the power of Libby.
I love the Queen, I love the IDEA of her, I love her artificial contrived ceremonious life which seems so stable and sensible from afar. A touchstone.
Though, when I walk by or in her palaces as a paying peasant, everything seems  like ancient  movie props, the chairs are tiny, the halls are not wide, the velvet is worn. Everything is SO so so old. Yet I am enthralled. 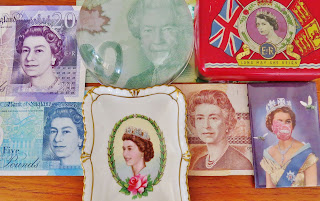 My son gave me this refrigerator magnet- knowing that I idolize her probably too much - reminding me that  in the end , she is simply a bag of meat like the rest of us. I came so close to seeing her when we were at Windsor, We went to buy post cards - bad timing on our part . She came out onto the lawn , waved and smiled and  probably looked for me...so sorry to disappoint . I remain her biggest fan! My imaginary friend, Queen Libby!
at June 24, 2017 1 comment: 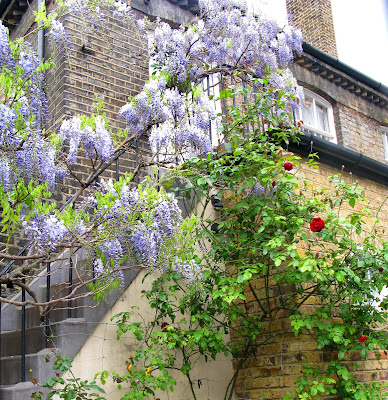 We stayed in Lady Margaret's town house in London for three weeks a few years ago. Her presence  felt -not physically, we never did meet her,  except for her curlers.
The weather, typically humid, stuck my hair to my damp face with no air in between strands. My hair is ridiculous , fine and limp at best.

I found her curlers, in a drawer. They saved the day, overnight. Slept uncomfortably as the curlers were pokey plastic, vivid dreams , that were not mine... 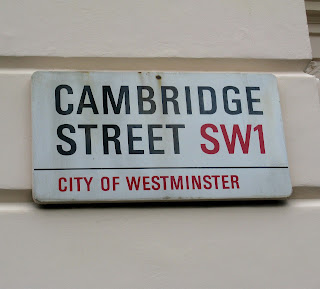 Like a Twilight Zone episode, Lady Margaret's curlers, having been so close to her brain , held  her thoughts,  her worries, her passion for England, her love of  green growing things. My having used something so close and personal was probably not right- who even DOES that!!  I did  and awoke to find my hair less flat , kind of fluffy,  and my brain somewhat changed. 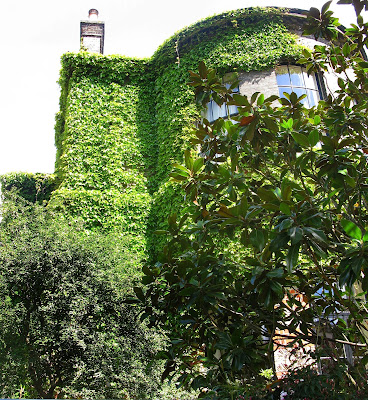 A fierce  yearning for ENGLAND , an appreciation for  climbing roses and church bells clanging out the hours, obsess me, and a craving for builder's tea from footed pot! I want biscuits, I want Marmite on toast. I want to soften my "r's". Of course my DNA might have something to do with my love for ENGLAND, it tingles when I am there, Wearing London like an old  comfortable slipper . Lady Margaret's curlers finally stabbed  it into my brain from her brain through the curlers, I am hooked!
Fair warning to you all , you may want to reconsider using some one else's personal items....or not. Thus I have been possessed  by Lady Margaret ,  her love of Albion , the Queen. and sausage.
I have returned twice since then and will be going back this September, though staying in another part of London, which I can not seem to get enough of.  "the strange intersection of the shadow land of the Twilight Zone , cue music- aaaannnnddddd-   You unlock this door with the key of imagination. Beyond it is another dimension - a dimension of sound, a dimension of sight, a dimension of mind. You're moving into a land of both shadow and substance, of things and ideas. You've just crossed over into the Twilight Zone.