best gifts of a lifetime 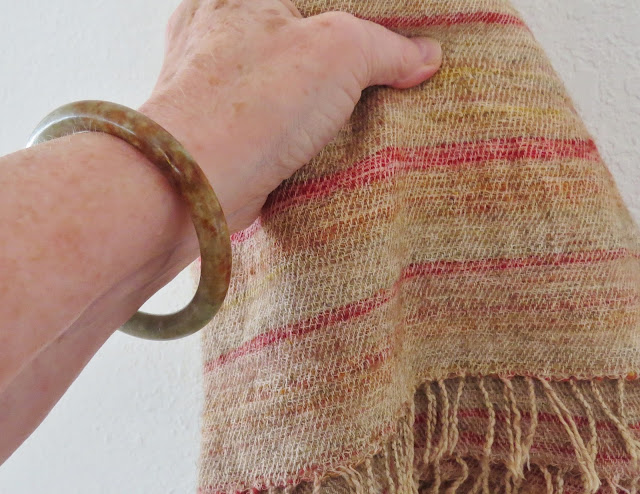 The things we take with us.

I was given these two items when I was thirty two, The jade bracelet has not budged from my wrist since given to me , I can not get it off even if I wanted to- a gift from China when it was favored nation, still under Mao. I have caught it in heavy doors, chopped wood and hit it with the ax , fallen- sliding along the sidewalk on it, had surgeries, and it has not budged. Jade bracelets are said to protect! This one certainly has. The ones you may see that are hinged with hardware are the ones broken, they have lost their luck.

The shawl,  brought back to me from  Afghanistan, finely hand woven from the chin hairs of goats, dyed by plant juices ,  has gone with me to every country, every state, a comfort/security blanket and most practical , light and warm. I have used it every winter/fall/spring since I was 32. It is light to pack, warm enough to use  for sleep.

I have  all but lost the friends who gave me these  - I take them with me every day. They are still my friends in memory and heart- and  the best gifts I have received from so long ago. 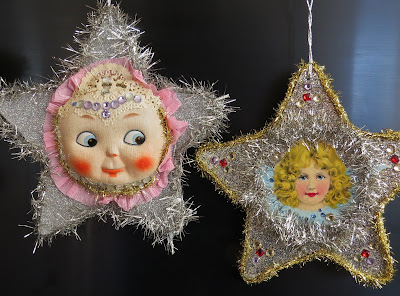 Unable to do much in the art department, (felting off limits) I am able to cut out card stars from old  board games, use old German angels and a doll face, loads of tinsel I bought in London ,  jewels and  a good glue that Sarah gave to me. 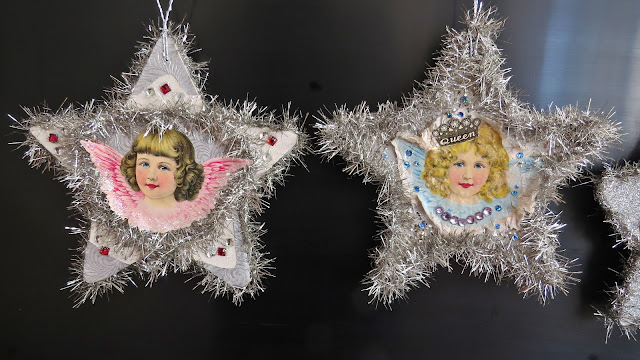 see how optimistic I am? Reckoning that Christmas will come again! 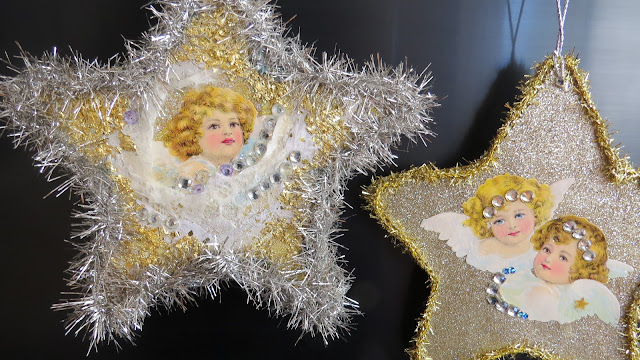 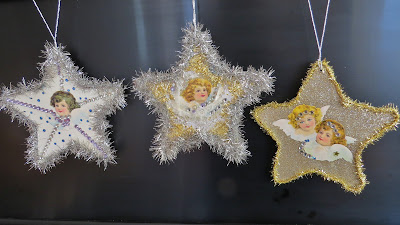 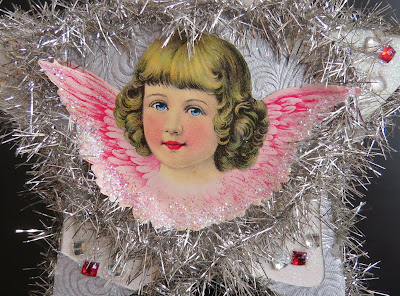 Out walking through the rose forest, capturing new growth in the sunshine!
My neck paid dearly for this outing, today I am back in the brace, behaving. 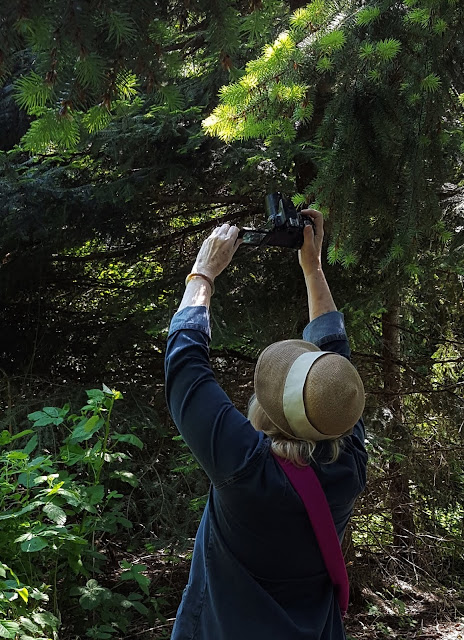 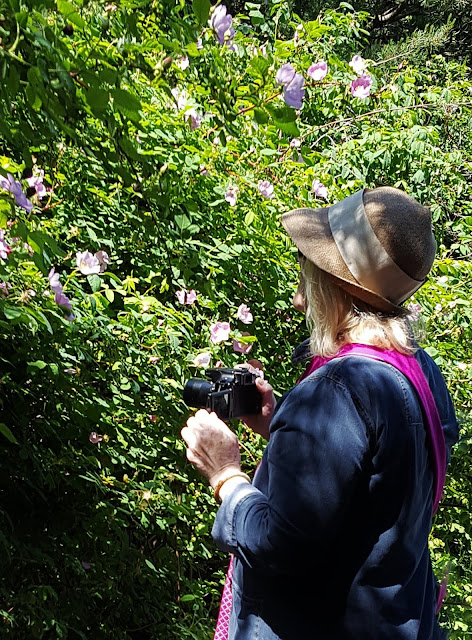 If I get all of my homemade Christmas out of the way now, I will feel so on top of it when the season rolls around! I will feel SO together for the first time ever.
Generally I think about Christmas around the 24th of December, and then, as any one can figure out, it is too late. And so, this is what our table looks like until I run out of boxes to cut into stars, recycling at it's glittery-est. 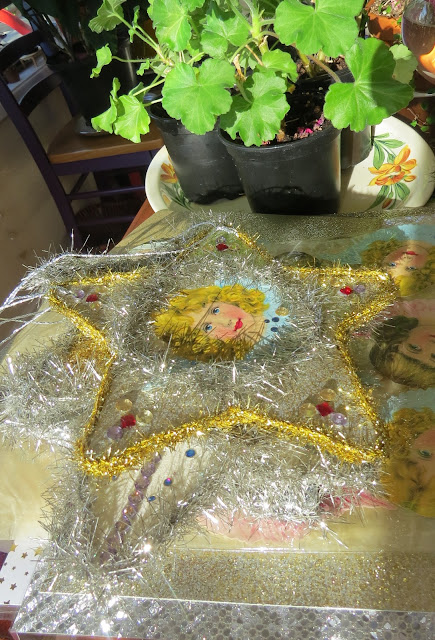 Does that not put you in the make -stuff -ahead -of- time  mood??
Thought so. 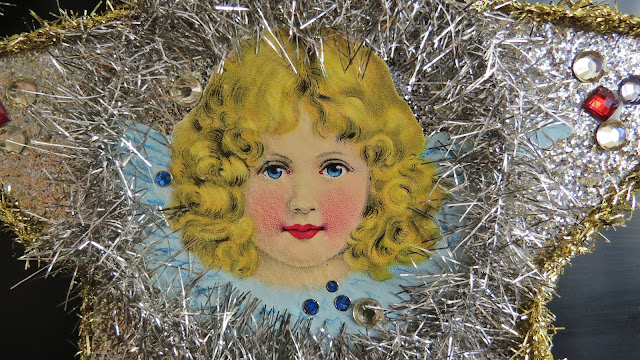 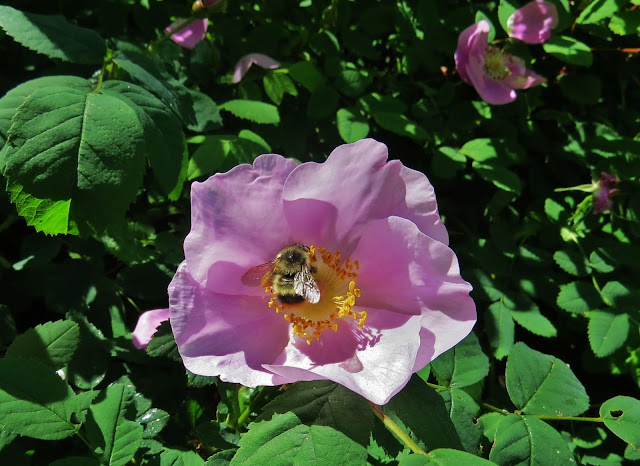 We walked yesterday in glorious sunshine, covered a lot of territory, slowly. Walking through the wild rose forest which is in full bloom right now , the fragrance is unbelievably rosy.

at the end of the rose forest there are Herons nesting in tall trees, Protected now by signage and fencing. as is the favorite dog swimming spot where the geese and natural plantings have been given priority. 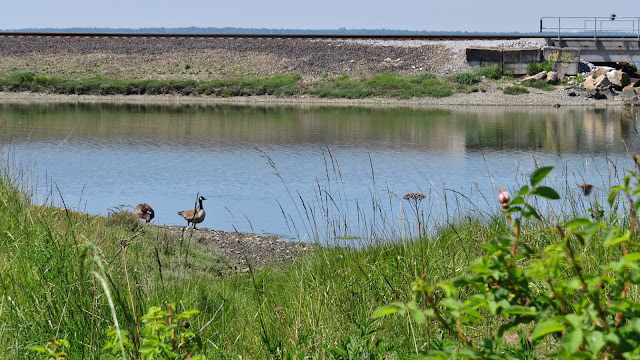 This delicate wild flower grows everywhere, Loads of it in our yard. Her name is Veronica. 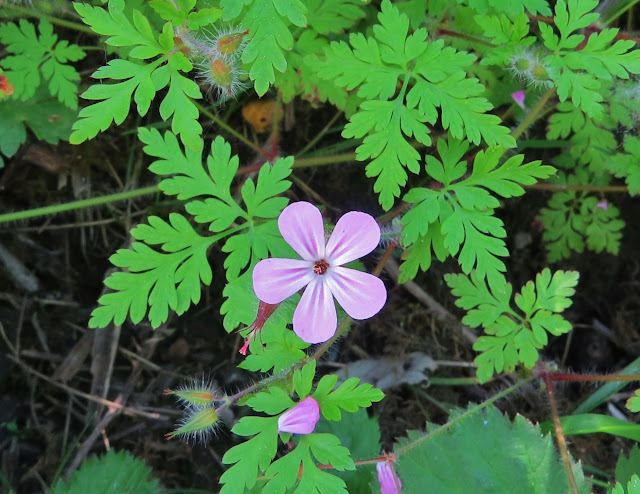 New spring growth abundant and mighty! This blackberry with it's stalk of one inch long barbs looks like it could eat a small dog! They are huge and ferocious plants growing rapidly overtaking the path- great for the rabbits scurrying along and into, for cover. Rabbits let the stabby growth take care of them. 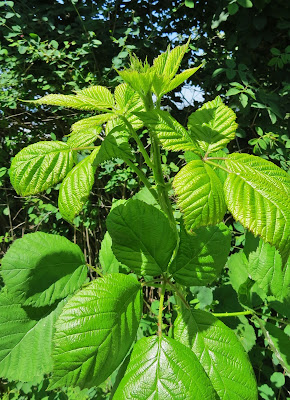 New growth, Scotch Broom, wild rose bushes- tall grasses and everything that makes you sneeze, overtaking hillsides and houses.
A very nice walk in all, today I pay...
with the energy of a stone. 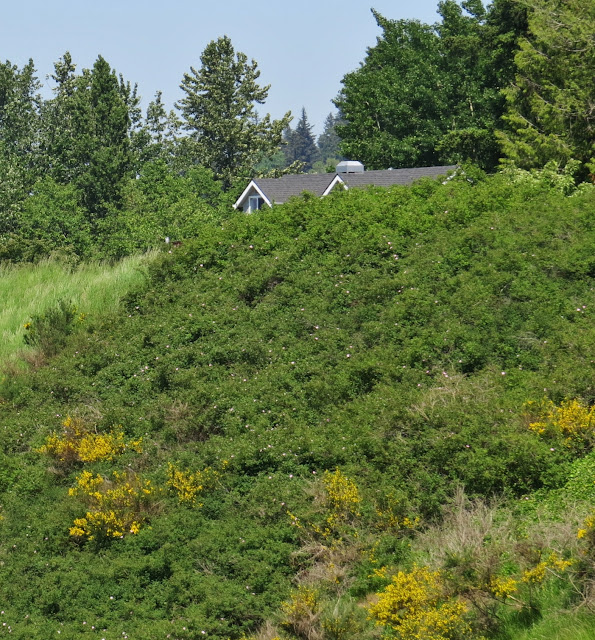 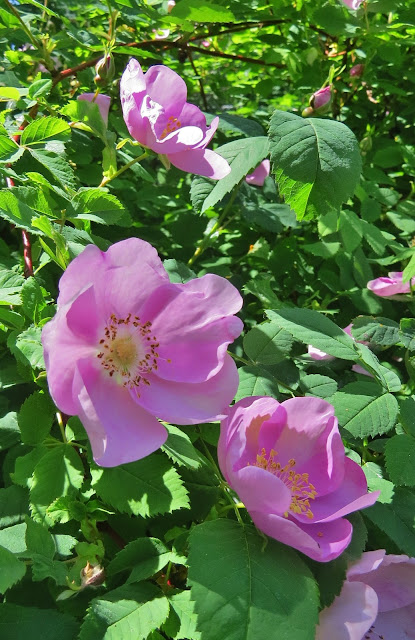 Day out with Stella 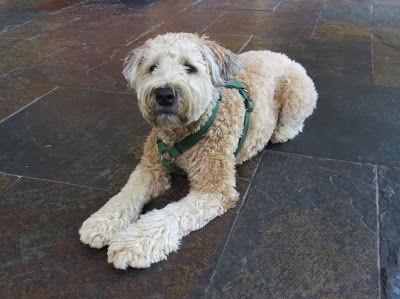 Today Stella and I went to the spa, owned by this pooch's  human, to have pedicure/manicure with my gift certificate.

When we checked in they had gotten the date wrong but had an opening in about an hour, so I gave that to Stella, she is leaving so soon for Finland and did not have the time that I have. I will go back another day. It is a beautiful spa! 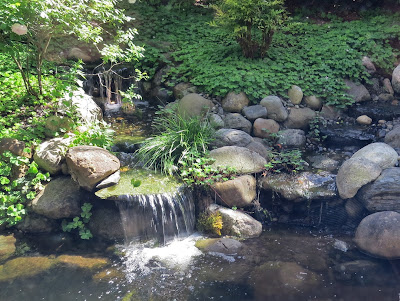 We went around the corner  to have spa lunch which was superb! Fish taco and crab melts and creme brulie . We timed it perfectly. 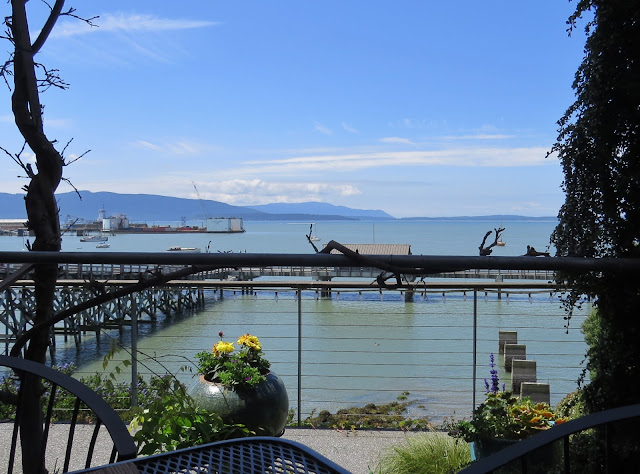 We sat next to a table of three men, Two Chinese and one white guy who did all the talking "Why would I hire a Chinese person", he said loudly...(?) I think he was being dick.

As we left I spotted this guy wearing a Whitstable t-shirt, stopped to chat about Whitstable and England and how much I yearned, and how our oysters are much better than theirs... They were headed down the coast to San Franciso . 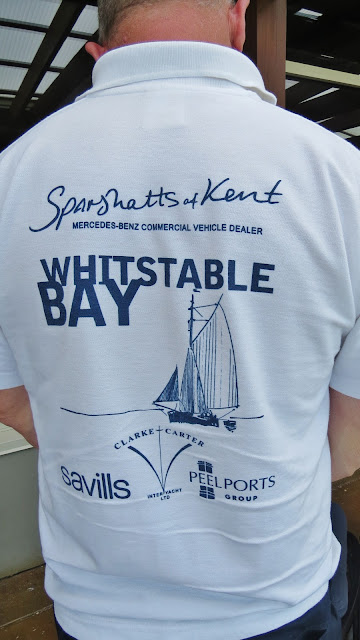 While Stella was getting her nails spa-ed. I took a walk around but did not go down the dock. 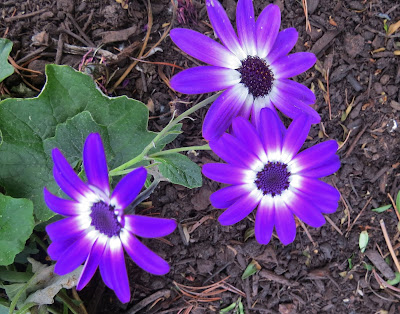 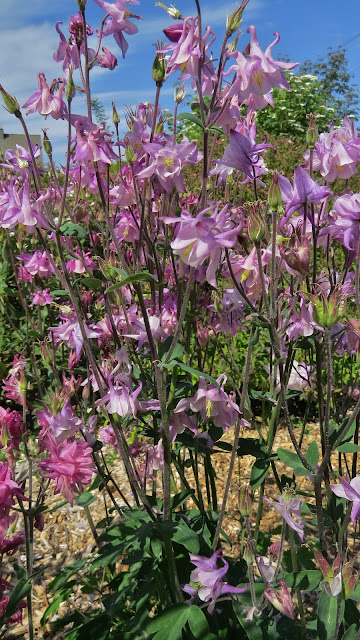 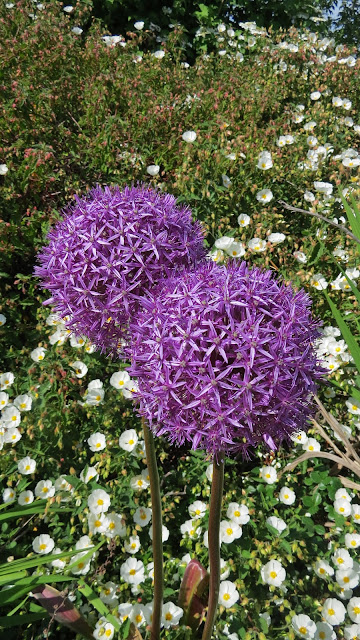 A girl with a banjo and a lovely voice belted out some great bluegrass tunes in the sunshine. 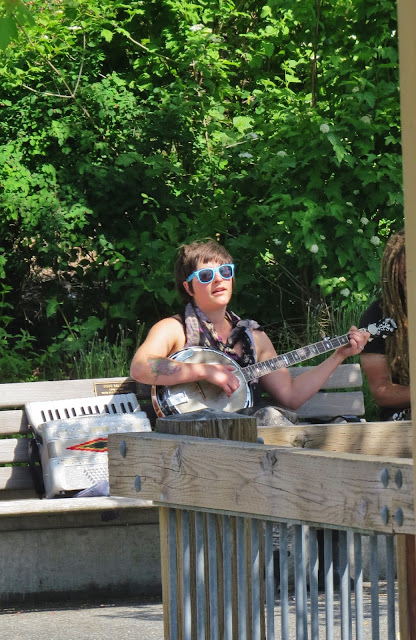 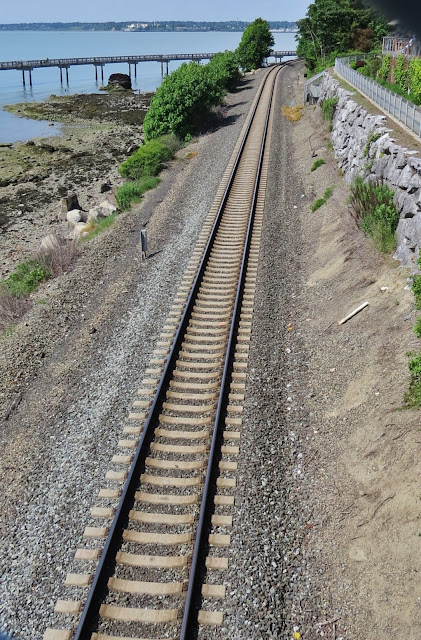 and then I cam home, took a pain pill and watched the bad news on the box...because i just don't know how this horror will work out, This nation if so f**ked.
Optimistic about the youth and their fervor!! They are a sharp lot, I have hopes!
at May 21, 2018 8 comments: