A puppy, succulents, and glasses 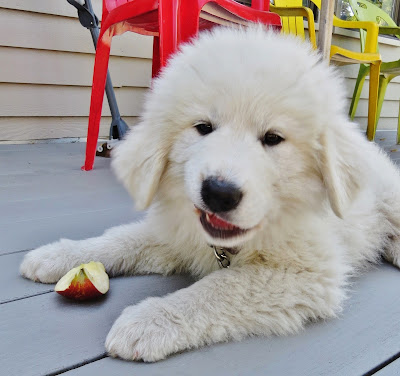 This is Luna, she brought her human to visit today. Luna is 8 weeks old, a great Pyrenees - she is already 16 pounds and will grow to be huge. She has her own sheep and field but right now she is kept near by, in the house- being a baby.
What a commitment for my friend , who finally had  a life of freedom- no more!
This little girl is demanding as puppies are! 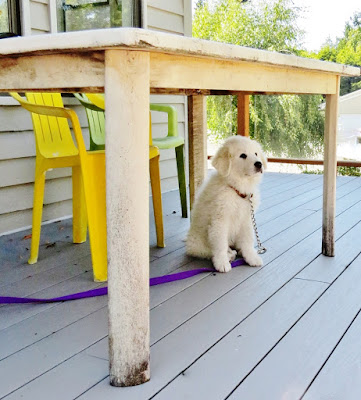 If I did not relish my new found freedom I would also be thinking to get a  pup again.
Though in a couple of days Cubby will be here for about two weeks so I will get my puppy fix before I take off to London- feeling anxious, Cubby will calm me down- he is a pretty mellow dog- just requires at least two good walks a day- and home made dinners. 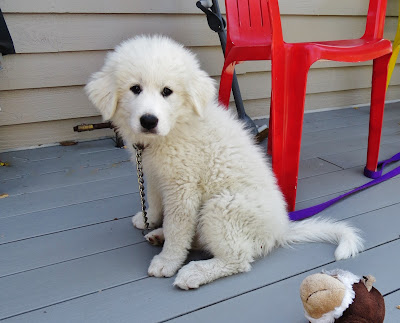 Whenever I meet friends that I have not seen in a long time I  take flowers.
I was meeting my God daughter ( whatever that means) and her Mom for tea in Fairhaven- flowers are abundant everywhere right now, so I took two little succulents instead. I have never been sure about what God mother is all about- something to do with raising the child in the Episcopal church if the parents should die or something...Since they are not church goers and I am atheist, I don't know where to put this title- I hope the little succulents will make up for whatever it is that I am missing... 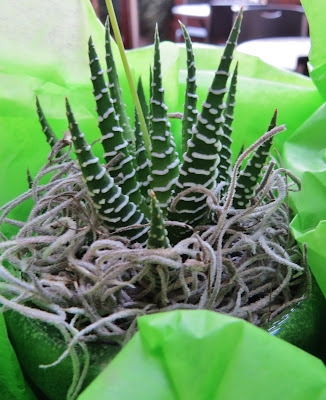 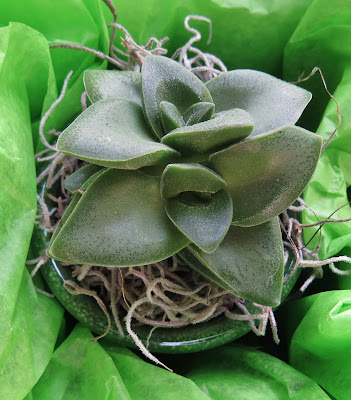 Waiting for them to show up- weather is superb and the temperature perfect, the wait is very pleasant.
The twisty tree asked that it's photo be taken because she thought she was looking exceptional  at that moment. 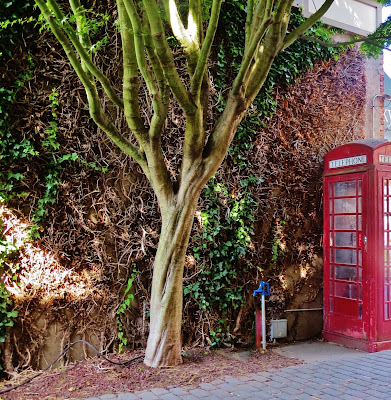 And then I went to the eye doctor -again- got some temporary plastic glasses until my super duper corrective ones come in a couple of weeks.
I can read - finally, finally!
All is well in this little corner- as long as I do not listen to radio, television or internet-
The horror! 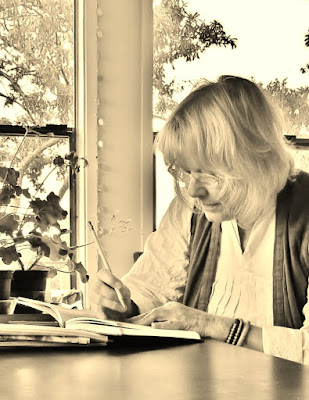 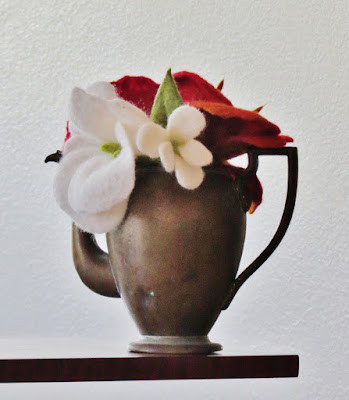 There is nothing more escapey than stabbing wool, Stabbing raw wool into some other form is mindless . Other than the focus it takes to not stab fingers and thumbs , leaving blood on the pad or in the wool- it is pretty much meditative.

The continual level of anxiety that this administration is producing is the new normal- as I suppose repetition of abuse  and shock becomes after a while.
The last domestic terrorist attack , however, has given us all a NEW , whole other level- I do not know where to put it-  I stab- I walk- I find new things- 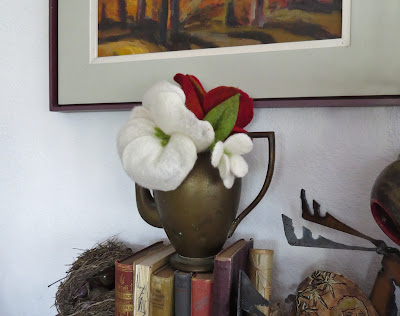 This  place opened this summer, where the skateboard shop used to be- looks like a very good thing! 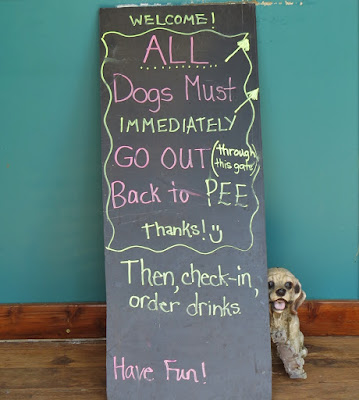 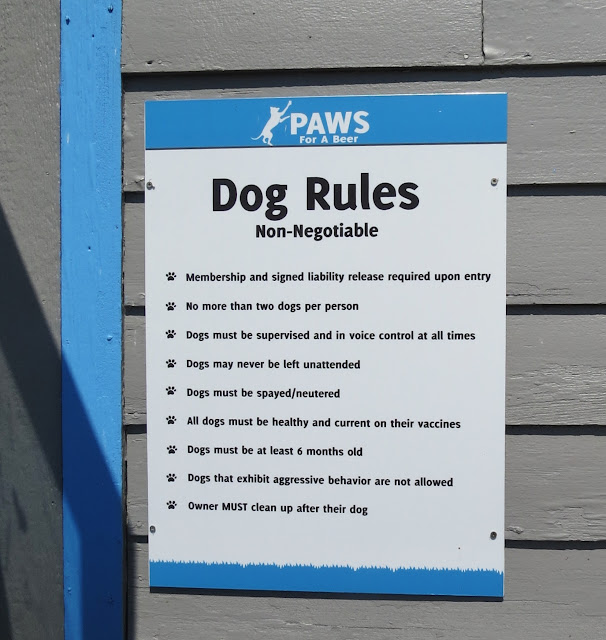 Take your pooch out on the town...Fairhaven is very dog friendly, has always been, but  after the Doggie Diner closed, where you could take your dog and sit with them at the table , everyone enjoying lunch  as they do in France- there has been no place to go , you know...as a couple...
with a play area. 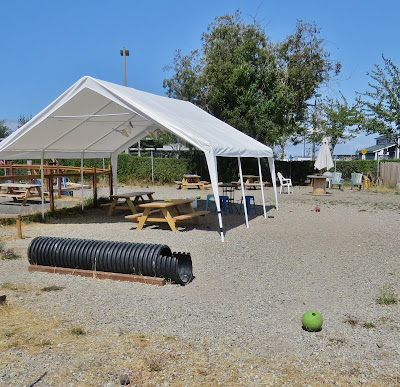 Knowing that this new bar is here makes me glad- just down the street by the bay- I will be pup sitting at the end of the week for  a couple of weeks, I am thinking that if the weather holds this would be grand.
A new hang out! 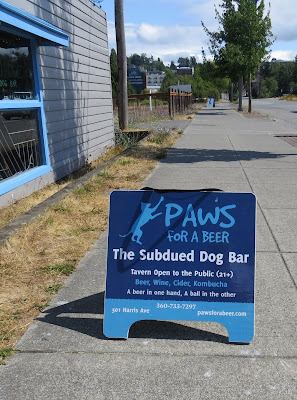 As for the weather- I guess north has been  the place to be- not once have we had the fan on nor turned the ac on  this summer. Maybe two "hot " days - in the upper 80's- cooling to lower fifties and less in the evenings.  It could be that our house is cooler because of the flow of air throughout and because we are close to the sea . The flowers have been loving this weather- the fruit trees and berry bushes  as well. Abundance!
Fair weather, fair bars, fair people, fair walk with my antlered pal- 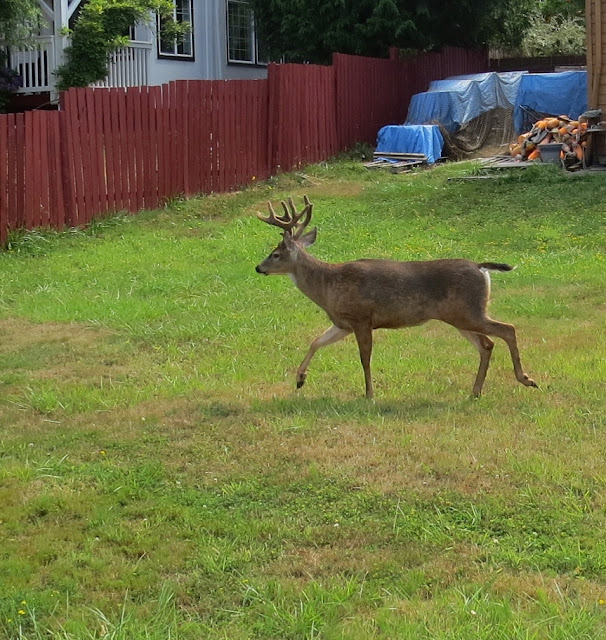 though nationally not so much. Shocking, sickening, horrifying, ignorant- could go on forever with negative challenging adjectives here- back to stabbing wool...walk some more-

turning up the music, turning down the horror, at least until I get footing.... YET AGAIN! 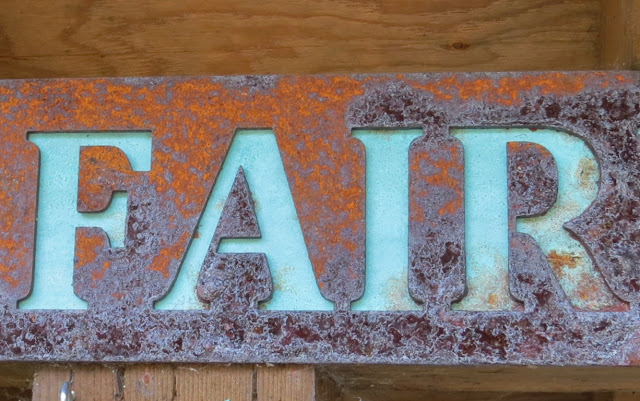 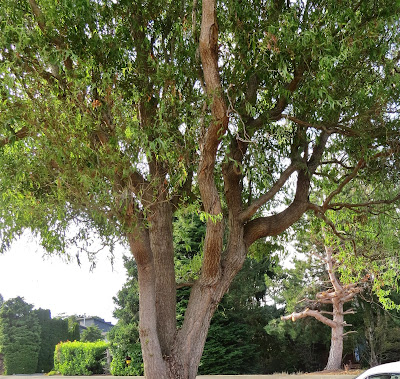 About fifteen years ago , I found a curly stick on my walk with Dexter, brought it home and stuck it in the dirt. This is the stick now!  The tree is huge, provides bird homes, curly willow for autumn  decorations for the flower shops, as it willingly sheds branches for the taking.
It is beautiful every season, especially when it loses it's leaves. The branches , an interesting tangle of relationship to one another.
Our pipes became clogged one summer , Mr. Man fairly convinced that the willow 's roots were the culprit. As it turns out , it 's roots are shallow and broad, the culprits were the Rhododendrons.
WHEW, that was a close call for my willow. 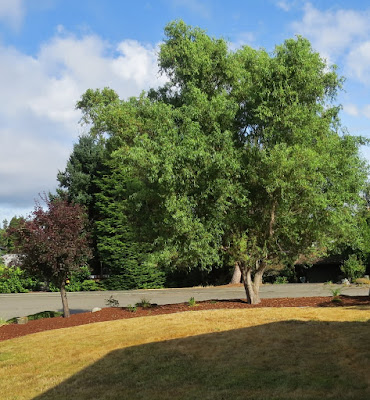 The weeping birch has met with more than one chainsaw event! It once was a magnificent umbrella but, like a hairdresser getting carried away scissoring and scissoring until there in one hair left, the wielder of the chainsaw lost track of what he was doing - it was butchery! 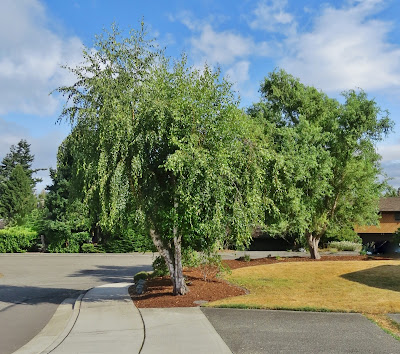 My dear old girl, Mrs. Plum, has also been "trimmed" to only four major branches, she is not doing well, though pumped out some delicious fruit this season, houses the crows, jays, and squirrels, I fear her days are numbered.
I reckon the chainsaw enthusiast needs to find another hobby... 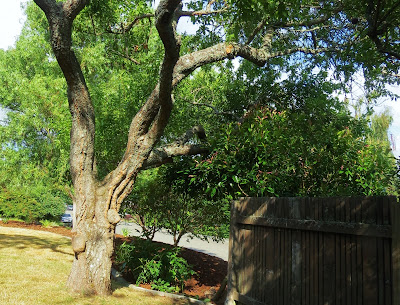 The Cherry tree has not been messed with and is doing very well. It was supposed to be a decorative dwarf when it was planted , it is HUGE, loads of cherries, which we leave for the birds.
It seems to be out of danger for the moment. 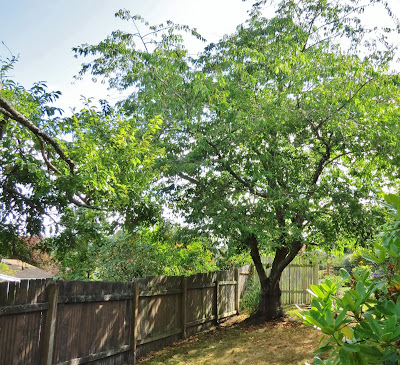 my relationship with these trees goes deep into my heart. rooted , you could say.
Having been devastated by the removal of all of the Christmas trees along the drive a few years ago, (still sad)
I am protective of these four trees. 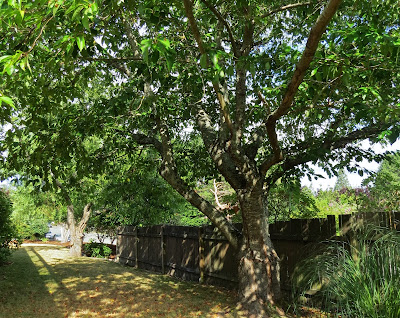 I will tie ribbons on them before I leave and maybe the chainsaw will have another think about tearing into them when I am gone.